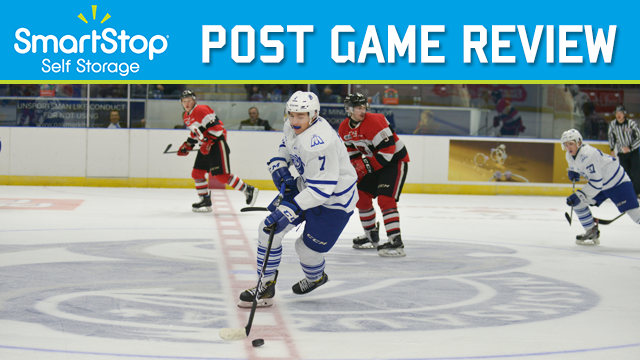 The Trout were in Ottawa today to try to break their nine game losing streak. Today kicked started a four-game away stint, and a win against the 67’s was crucial.

The first period started off with a quick penalty for the Steelheads, as Vili Sarrijarvi was booked within six seconds for slashing. The Trout were able to kill that penalty, but would head to the box again at 5:41, with a kneeing penalty from Michael McLeod. Twelve seconds later the game went to a four-on-four, as Artur Tyanulin interfered with Shaw Boomhower. Ottawa opened up the score at 10:18 with a shot from Tyanulin, assisted by Austen Keating and Sasha Chmelevski. At 18:12, Ryan Orban was booked for high-sticking, and the Steelheads took advantage of the extra man. Seven seconds into the power play off a pass from Michael McLeod and Nicolas Hague, Owen Tippett scored his 19th of the season. Unfortunately for Mississauga, that momentum did not last long, as Drake Rymsha gave Ottawa the 2-1 lead, assisted by Jared Steege to close out the period.

Mississauga was able to rally together quickly in the second, and at 6:04 Owen Tippett scored the equalizer. His 20th goal of the season was assisted by Nathan Bastian and Sarrijarvi. Just over three minutes later, Nicolas Hague scored his ninth of the season, and gave the Trout a 3-2 lead. His goal was assisted by Saarijarvi and Michael McLeod. The Steelheads dominated the remainder of the second, and were able to hold onto their lead going into the third.

The Trout caught the 67’s sleeping early in the third, and Brendan Harrogate capitalized 55 seconds into the frame. His 12th of the season came off an assist from Tippett and Stefan LeBlanc. With that fourth goal, the 67’s made a goalie change, pulling Oliver Lafreniere for Leo Lazarev. Despite the change between the pipes, Harrogate netted his 13th of the season at 4:33 unassisted to bring the score up 5-2 for Mississauga. At 11:02, Ottawa conceded double penalties, sending Kody Clark to the box for slashing, and Noel Hoefenmayer for tripping. This opened up the door for the Captain, Michael McLeod to score off a rebound, assisted by Tippett and Nathan Bastian. This goal was number six for both Mississauga, and McLeod in the season. The 67’s were able to recover a goal at 13:43, as Tye Felhaber sent a pass to Chase Campbell who was left wide open at the back door. This goal would cut the lead 6-3, but it would be the last of the game, and the Steelheads took the win in Ottawa.

The Steelheads continue their away road trip, where they will face off against the Kitchener Rangers on Wednesday, December 7 at 7:00pm. You can catch this game, and all away games on Rogers TV. Be sure to follow us on Twitter, Facebook, and Instagram – @OHLSteelheads – to stay up-to-date with all things Steelheads.