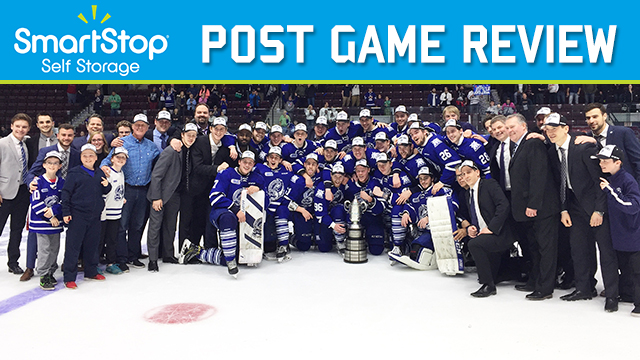 Game four of the Eastern Conference Finals was a very important one for both teams. The Mississauga Steelheads looked to knock out the top seed in the East in four games and make it to their first ever OHL Finals, while the Peterborough Petes are on the cusp of elimination, playing for their post season lives.

The Steelheads and the Petes came out of the gate fast. Michael McLeod for the Steelheads and Nikita Korostelev for the Petes both had great scoring chances by using their speed. 8:29 into the period, Owen Tippett got one past Peterborough goalie, Dylan Wells, to open up the scoring. Less than five minutes later, Ryan McLeod received a pass from brother Michael and drove the net hard to put the Steelheads up 2-0 heading into the second period.

Early on in the second period, Vili Saarijarvi shot from an awkward angle that beat Wells. The Steelheads continued to control play throughout the second frame. Jacob Moverare sniped a goal over the left shoulder of Wells to give the Steelheads a four goal lead. With just over three minutes remaining in the second, Trent Fox takes a shot that just squeaks Wells and puts the scores to 5-0 Steelheads after 40 minutes.

The Steelheads were one period away from making history and heading to the OHL Championship Series. Michael McLeod continued using his speed early in the third scoring the Steelheads sixth goal of the game less than minute into the period. The Mississauga Steelheads controlled the puck for most of the third period. Brendan Harrogate sniped one last goal past Wells to put the icing on the cake of the Trout! The Steelheads won by a final score of 7-0, becoming Eastern Conference Champions for the first time in the club’s five-year history.

The Steelheads are headed to the OHL Championship Series to face the winner of the Wayne Gretzky Trophy in the Western Conference between the Owen Sound Attack and the Erie Otters.