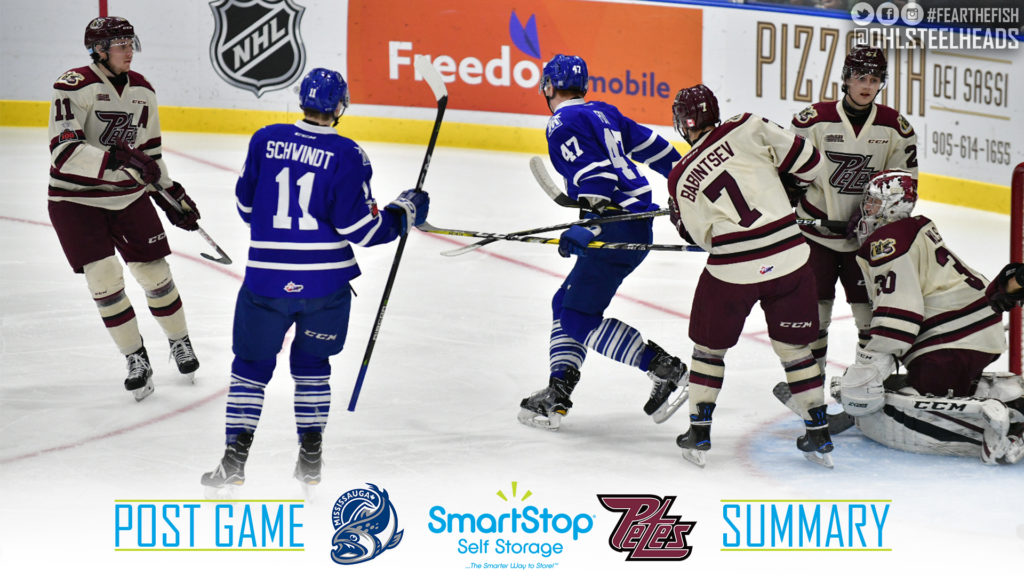 The Steelheads rolled into Peterborough to take on the Petes in an Eastern Conference tilt and the first game of a back-to-back for the Fish.

Mississauga started off strong, scoring less than five minutes in to the period. Michael Little capitalized on a bouncing puck to tap one in past Dylan Wells, giving him his 13th goal of the season, and the Steelheads the 1-0 lead. Peterborough put on the pressure and were rewarded with a goal of their own at 8:31 of the frame, off a Der-Arguchintsev tap-in, to give him his 10th of the season. Mississauga headed to the penalty kill when Nicolas Hague was called for high sticking. The Petes capitalized on the man-advantage at 10:33 of the period, thanks to a Nikita Korostelev goal, making it 2-1. Korostelev quickly scored another, tallying his second of the night and his 27th of the season. Ryan McLeod joined in on the scoring fun, firing one past Wells with less than two minutes remaining in the period to make it 3-2. Peterborough got one more before the buzzer sounded when Pavel Gogolev wrapped one around the net and made it 4-2 for the Petes. Shots at the end of the period were 15-6 in favour of Peterborough.

Jacob Ingham was in net to start the second period and the Steelheads came out with a lot of energy. Mississauga quickly scored when Trent Fox fired one home from the high slot to pull the Steelheads within one. Peterborough quickly responded with a goal of their own with Bobby Dow tallying his 11th of the season and making it 5-3. Mississauga pulled within one again when Fox scored his second of the night and 22nd of the season, making it 5-4. Nikita Korostelev scored less than a minute later, completing the hat trick and notching his 28th goal of the season for the 6-4 lead. Fox completed a hat trick of his own, less than a minute later, tallying his third goal of the game at 16:56 of the frame and making it 6-5. Shots at the end of the period were 24-22 for the Steelheads.

The third period started off hot with Ryan McLeod scoring less than two minutes in, tallying his second of the night and tying the score at 6-6. The Steelheads scored another just over a minute later, when Mathieu Foget joined in on the scoring, notching his 20th of the season and giving the Fish a 7-6 lead. Isaac Walker was called for delay of game, giving the Petes their third power play of the game, but Mississauga scored shorthanded on a Foget shot, extending their lead 8-6. Less than five minutes later, the Petes pulled within one on a Declan Chisholm shot for his third goal of the season, making it 8-7. The Steelheads hung on and won 8-7 to notch two points in the standings and clinching a playoff berth in the process.

Mississauga is back in action tomorrow night, Friday March 9th, against the Oshawa Generals.