Steelheads close out 2017 in North Bay 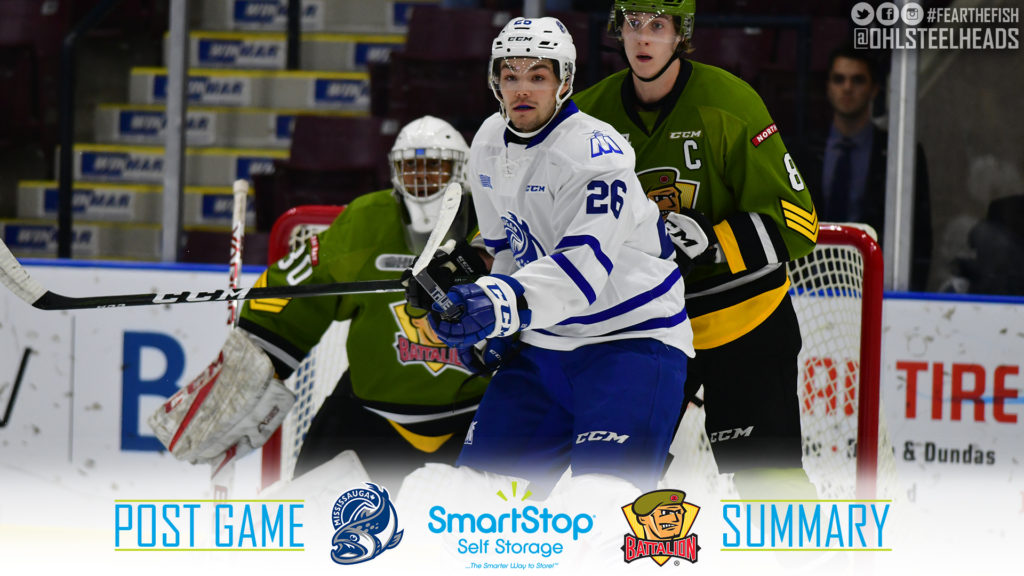 Coming off a 3-2 win over the defending MasterCard Memorial Cup Champion Windsor Spitfires, the Steelheads visited the North Bay Battalion Sunday afternoon to close out 2017. These two teams are 1-1 this season, with the Battalion winning the most recent contest earlier this month 4-3.

Just past the halfway mark of the opening frame, the Battalion scored two back-to-back goals from Brad Chenier and Luke Burghardt to jump out to a 2-0 lead. Down by two heading into the first intermission, the Steelheads hoped to regroup during the break and come out strong to start the second.

Unfortunately things didn’t go their way as the Battalion added two quick goals in the first minute from Burghardt and Chenier again. Those goals resulted in a goaltender change for the Steelheads as Jacob Ingham entered the game to relieve Emanuel Vella. Ingham was put to the test right away as North Bay’s Luke Burghardt was awarded a penalty shot. Ingham made the save and quickly settled in between the pipes. The Battalion shook that off and continued to pressure, adding two more goals from Luke Moncada and Adam McMaster, giving North Bay a 6-0 lead. Just past the halfway mark of the frame, Ryan McLeod would finally get the Steelheads on the board and cut the deficit. Owen Tippett assisted on McLeod’s 10th of the season. Seconds later, Cole Schwindt added a second goal for the Steelheads to bring the score to 6-2. The Battalion responded quickly to extend their lead 7-2 with a goal from Andy Baker. At 15:33, Ryan McLeod fed Owen Tippett a pass from behind the Battalion net, and he made no mistake beating Propp to make it 7-3 heading into the second intermission.

Cam Dineen had the lone goal of the third at 16:05 from Brett McKenzie and Luke Burghardt. The Steelheads will visit the Erie Otters on January 3rd before returning home to host the Soo Greyhounds on Thursday, January 4th.