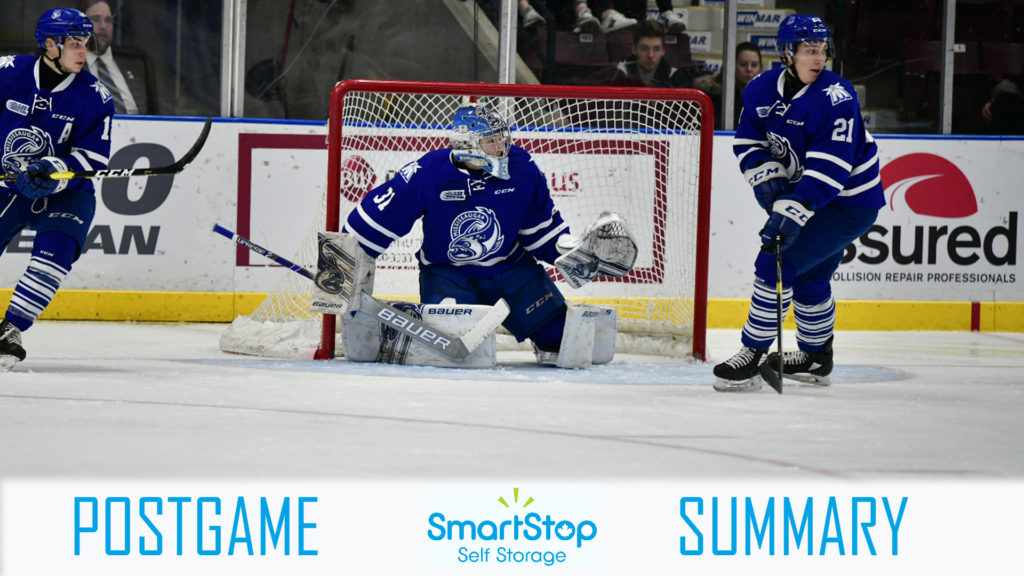 Kingston, ON – The Mississauga Steelheads travelled to Kingston to wrap up a 3-game week on Sunday afternoon.

The Steelheads came into the game coming off a loss to the Ottawa 67’s, in a game that was nationally broadcasted on Sportsnet. Kai Edmonds played one of his best games of the season, stopping 27/28 shots on goal (.964 SV%). The Frontenacs entered Sunday’s matchup on a hot streak, picking up points in each of their previous four games.

Nic Canade got the Steelheads off to a quick start, as just twenty seconds into the game he curled into the faceoff circle and wired a shot past Christian Propp. Mississauga’s penalty kill was up to the task in the first, killing off seven consecutive minutes of 5-on-4 play. With the Frontenacs coming down the ice on a 2-on-1, Joe Ranger made a spectacular toe save to maintain the Steelheads lead. At the end of the first, Mississauga had a 1-0 lead and the teams were tied in shots goal at nine.

Thomas Harley had the following to say about the Steelheads first period play “It was a pretty good period. We killed off our penalties, we were up on the blue lines shutting them down, and got a quick goal early that was good for our confidence.”

Kingston tied the game at one in the second, as a point shot from Jake Murray was deflected by Shane Wright. The Frontenacs took the lead, as Jake Murray walked into the slot uncontested and lifted a backhander over the shoulder of Ranger. With under a minute remaining in the second, Ranger made a nice save on Nick Wong in the slot to keep the Steelheads deficit at one. At the end of the second, Mississauga trailed by a goal.

Midway through the third period, James Hardie was hauled down by Nick Wong on a breakaway and was rewarded a penalty shot, as the referee pointed to centre ice. Hardie made no mistake, beating Propp over the blocker to tie the game at two. Kingston took the lead on the powerplay, as a Shane Wright one-timer beat Ranger to make the it 3-2. The Steelheads pulled Ranger for the extra attacker with the hopes of tying the game, but were unable to score, ultimately falling in the game by a score of 3-2.

Joe Ranger played well in the game, stopping 28/31 shots on goal (.903 SV%), while Nic Canade and James Hardie added goals in the loss.

Be sure to check out the Steelheads Pink at the Rink Jersey Auction, with the chance to bid on an autographed Pink at the Rink jersey. All proceeds from the auction will be going to the Canadian Cancer Society.

The Steelheads will return to the Paramount Fine Foods Centre on Wednesday, November 27th at 11:00 AM for their annual School Day Game against the Guelph Storm. Tickets to the game are $7 and can be purchased by visiting the Box Office, online through ticketmaster.ca or by calling 905-502-9100.