Steelheads come up short against Sting 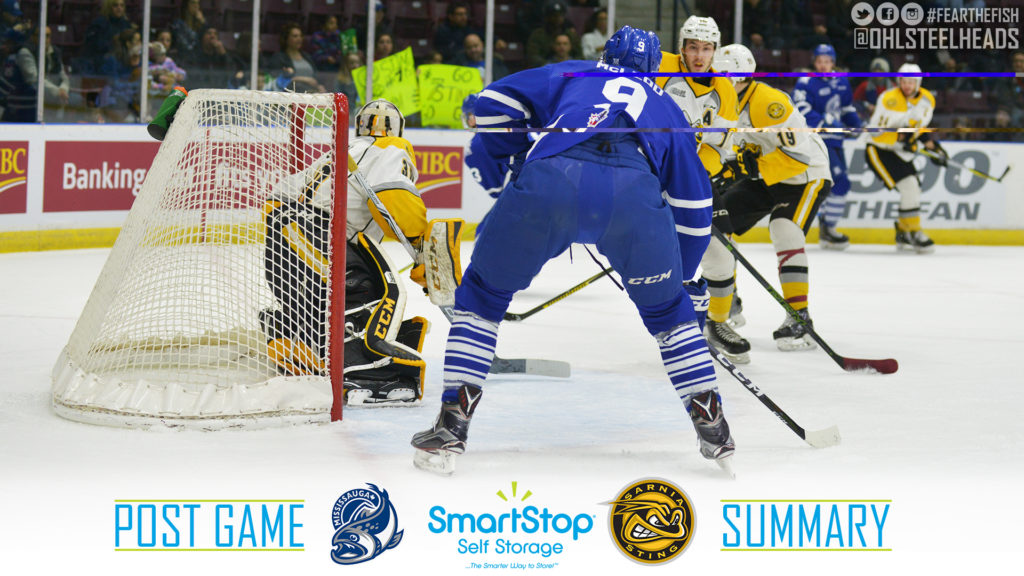 The red-hot Sarnia Sting came into the Hershey Centre strong this evening. 2:50 into the first frame, Cole Schwindt took a slashing minor sending the Sting to the power play. It took all but seven seconds for the Sting to show why they are ranked #1 in Canada. Brady Hinz snuck one past Jacob Ingham for his 11th goal of the season. Assists went to Jordan Ernst and Jordan Kyrou. The first saw a lot of back and fourth but not much action. At 15:30 Thomas Harley received an interference minor putting the Steelheads penalty kill unit back to work. The Sting were unable to capitalize. Towards the end of the first frame Sting’s Adam Ruzicka was sent to the box for a hooking minor. The shots in the first period were 17-15 in favor of the Steelheads.

1:19 into the second frame Nicolas Hague got the crowd going by ripping one past Justin Fazio tying the game 1-1. Hague’s goal was unassisted.  Ingham was tested multiple times this period and made some huge saves keeping the Steelheads in the game. Unfortunately, the Sting’s Brayden Guy was able to get one past Ingham restoring the Sting’s lead. Both teams showed immense physicality and determination keeping the pace quick. With less than three minutes remaining in the second frame, captain Michael McLeod brought the Steelheads back to life by tying the game at two. Assists on McLeod’s goal went to Trent Fox and Owen Tippett. Shots on goal 18-13 in favor of the Sting.

The Sting came into the third strong controlling the majority of the puck possession in the first half of the frame. At 6:38 Brayden Guy tallied his second goal of the game, giving the Sting a 3-2 lead. Franco Sproviero and Connor Schlichting got the helpers. At 8:17 Michael Little saw the box for a two-minute blindsiding minor, where the Sting’s power play until capitalized extending their lead to 4-2. Jordan Ernst got the goal and Connor Schlichting and Franco Sproviero picked up the helpers.  Emotions were flowing as both teams picked up a couple of penalties. Steelheads defenceman Nicolas Hague (roughing minor) and Keean Washkurak (fighting major) and the Sting’s Drake Rymsha (hooking and roughing minor) and Anthony Salinitri (fighting major). About a minute later Trent Fox found himself in the box for a slashing minor where the Sting were able to capitalize again extending the lead to 5-2. Adam Ruzicka got the goal and Jordan Ernst and Jordan Kyrou picked up the helpers. At 16:42 the march to the penalty box continued as Steelheads defenceman Merrick Rippon received a roughing minor along with the Sting’s Ryan McGregor (hooking minor) and Sean Josling (roughing minor). The last minute and a half of the third the Steelheads put two past Justin Fazio to cut the deficit. The first goal went to Jacob Cascagnette with the assist by Owen Tippett, the second goal for his second of the night went to Nicolas Hague with the helpers to Michael McLeod and Trent Fox. Unfortunately, time wasn’t on the Steelheads side as they ended up losing 5-4 to the first place team.

The Steelheads will back on Friday, December 8th where they will host the Barrie Colts.