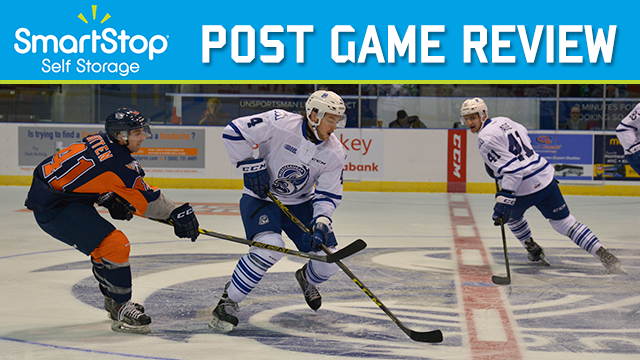 After a road loss to the Windsor Spitfires last night, the Steelheads returned to home ice to take on the Flint Firebirds. Looking to steal Flint’s thunder, Mississauga hoped to snap their three game losing streak by denying the Firebird’s their fourth straight win.The first 20 minutes saw an explosive start from both teams, trading blows and the puck back and forth. Mississauga put the pressure on early, and kept it on, even after Michael Little was sent to the box at 6:35 for a sticking penalty. Although the Steelheads were short-handed, you wouldn’t have known it, as Captain Michael McLeod lead two attacks on the Firebirds’ net. The frame ended in a last second heartbreaker, as Kole Sherwood was left open to tap one in. Sherwood’s goal at 19:50 was assisted by Nicholas Caamano and Jalen Smereck as the Firebirds held a 1-0 lead heading into the first intermission.

The second period saw a lot of penalties, the first coming from Dennis Busby at 1:12 for slashing. With the man advantage, the Steelheads were able to fire off several shots, but just couldn’t find the back of the net. A double penalty for roughing on Damian Bourne and Jalen Smereck tipped the direction of play to the Firebirds who managed to get several great chances off. These were all denied by Matthew Mancina until another series of penalties gave the Firebirds a 4-on-3 man-advantage. Ryan Moore, assisted by Jalen Smereck and Kole Sherwood, was able to capitalize and brought the score to 2-0.Shots kept coming in the third but there wasn’t a solid chance until 12:23 when Owen Tippett fired a rocket of a shot. After that, Mississauga seemed to pick up the pace as shots from Jacob Moverare, Michael Little and Shaw Boomhower just narrowly missed the mark. At 15:08, off an assist from Damian Bourne, Austin Osmanski gave the Steelheads the goal everyone could feel coming. With a minute left and Mancina pulled in favour of the sixth man, Sean Day came in clutch with the game-tying goal.

Heading into sudden death 3-on-3 overtime, everyone was on the edge of their seats as both teams had some great opportunities. Mancina and Hicks both made some incredible saves and with the two of them keeping the pucks out, this game was headed to a shootout. Mississauga’s first shooter, Michael McLeod found the back of the net, while Flint was unable to score on the first shot. Hicks made the save on the second shot coming from Aidan McFarland, while Mancina was unable to stop Kole Sherwood. Nathan Bastian was the last shooter and snuck the eventual game winner past Hicks as Mancina denied Flint’s last shooter, Nicholas Caamano.