Steelheads Conclude Regular Season with a 3-1 Win Over Kingston 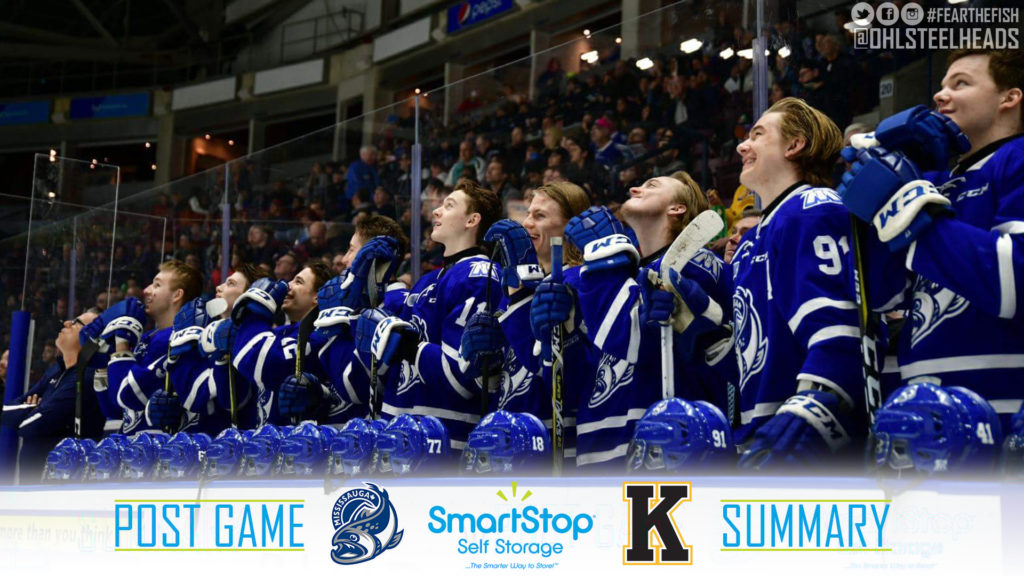 The Steelheads geared up for their final regular season game against the Kingston Frontenacs on Sunday afternoon.

The game started off with lots of play in the neutral zone, but the Steelheads had the upper hand on shots as it took over eight minutes for Kingston to record their first shot on net. All that effort paid off for Mississauga, as they scored first off a Ryan McLeod shot for his 25th of the season. Kingston evened things up less than two minutes later when Sam Field scored his fifth of the season. The Fish ended the period on a strong note with Cole Carter scoring his 24th goal and putting the Steelheads up 2-1. Shots at the end of the frame were 10-7 for Mississauga.

The second period kept going in the Mississauga’s favour as they got a power play chance just one minute and 14 seconds into the frame when Jason Robertson was called for hooking. The Steelheads failed to capitalize on the man-advantage and the score remained 2-1. Mississauga continued with the offensive pressure and were rewarded with a goal from Ryan McLeod on the power play, putting the Fish up by two and giving McLeod his second goal of the game. Stephen Gibson was called for tripping at the tail end of the frame. Shots were 24-11 for the Steelheads at the end of the period.

Mississauga started the third period on the penalty but killed it off to keep the score 3-1. The Frontenacs added some offensive pressure, but Jacob Ingham made some huge saves to keep the Steelheads ahead by two. Halfway through the frame, there was some physicality and Mississauga skated away with a power play and Emmett Gordon sat in the box with a roughing minor, but the Fish were unable to convert on the man-advantage. The game ended and the Steelheads secured a 3-1 win to close out the regular season. Final shots were 33-17 for Mississauga.

The Steelheads begin their quest for the OHL title with round one of the Playoffs on Thursday, March 22nd, against the Barrie Colts at the Barrie Molson Centre at 7:30 PM.