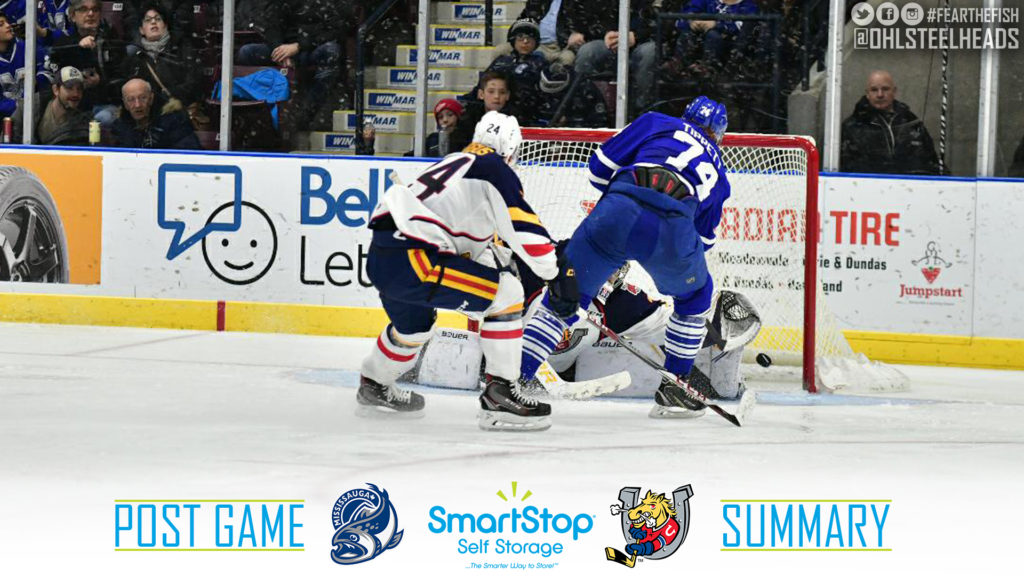 After shutting out the Flint Firebirds on Monday, the Steelheads travelled to Barrie Thursday night for a central division matchup against the Colts. The Colts were looking to get back in the win column after the Kingston Frontenacs snapped a three-game winning streak that started after a 6-4 loss to Mississauga on February 9.

Mississauga would strike first, early in the opening frame as Michael Little buried a rebound past Lazarev to give his team a 1-0 lead. Past the halfway mark of the period, the Steelheads extended their lead to two as Ryan McLeod snuck a wrap around behind Lazarev. The Colts outshot the Steelheads 11-7 in the first, but trailed 2-0 on the scoreboard heading into the first intermission.

The Steelheads didn’t take their foot off the gas and came out of the gate firing in the second. The early pressure paid off again as Little buried a rebound off a shot from Owen Tippett to give the fish a 3-0 lead. Nearing the three minute mark of the frame, the Colts would get a much needed opportunity as Mississauga’s Mason Hardy would head to the box for hooking. Dmitry Sokolov capitalized on the man-advantage, firing a wrist shot past Emanuel Vella to get the home team on the board and cut the Steelheads’ lead 3-1. Minutes later, the Steelheads would see their first power play opportunity as Barrie’s Jaden Pecca would head off to serve a too many men penalty. While on the powerplay, a scramble in front of the Barrie goal would allow Nicholas Canade to bang home another rebound and restore the Steelheads’ three-goal lead. Past the halfway point of the game, the Steelheads would see another power play opportunity as Aidan Brown would sit for cross checking. The Steelheads capitalized a minute into the power play as Owen Tippett cruised into the zone and sniped a shot past Lazarev to bring the Steelheads lead to 5-1. That would be the end of Lazarev’s night as rookie goaltender Kai Edmonds entered the game in relief. The Colts were able to cut the Steelheads’ lead and close out the period 5-2 as Joey Keane buried a rebound past Vella. Mississauga outshot Barrie 13-9 in the second and held a 5-2 lead after 40 minutes of play.

After back-to-back goals in the first half of the third to bring the home team within one, things seemed within reach for the Colts. With just over four minutes remaining in the third, Mississauga’s Cole Carter would pick off a loose puck at his own blueline and skate in on a breakway beating Edmonds to restore the Steelheads’ two goal lead. Mathieu Foget sealed the win with an empty net goal at 19:32 as the Steelheads picked up a crucial two points.

The Steelheads will return home to the Hershey Centre tomorrow to host the Niagara IceDogs for another big central division matchup.