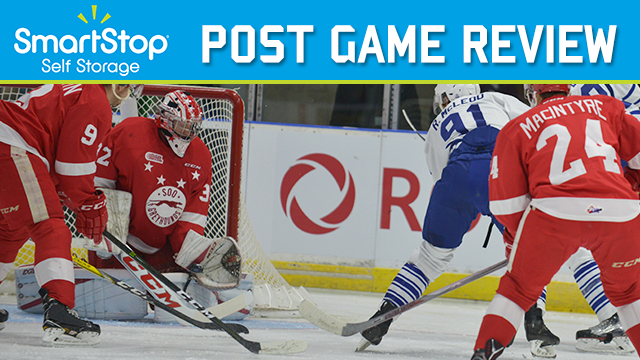 The Mississauga Steelheads continued their northern road trip Friday night with a stop in the Soo to take on the Western Conference leading Greyhounds. Coming off a 2-1 win over the North Bay Battalion Thursday night, the Steelheads hoped to stay in the win column and pick up their ninth straight win on the road. Although the Greyhounds would strike first in this contest, the Steelheads responded with six unanswered goals from six different players, as they now sit atop the central division with 42 points.

Greyhounds’ David Miller would open the scoring in the first with his 16th of the season from Gustav Bouramman and Tim Gettinger at 5:49. That goal would be the lone tally of the opening frame as the Greyhounds held a 1-0 lead heading into the second intermission. Shots on goal in the first were 13-6 in favour of the home team.

The Soo came out quick again in the second, capitalizing on the man-advantage with a goal from Tim Gettinger, his 21st of the season, from Bouramman and Blake Speers. Despite being down by two, the Steelheads kept their heads up, and from that point on, controlled the pace for the rest of the game. Newcomer Trent Fox would get the Steelheads on the board at 4:58 of the second, notching his first goal in the blue and white since being acquired by the Steelheads at the OHL trade deadline. Austin Osmanski and Jacob Cascagnette picked up the assists on Fox’s seventh of the season. Nearing the end of the middle frame, Owen Tippett would even the score with a power play goal from Vili Saarijarvi and Stefan LeBlanc. The goal was Tippett’s 34th of the season, setting a new Steelheads franchise record for most goals scored in a season. The game sat tied at 2-2 heading into the second intermission, with shots on goal 12-8 in favour of Mississauga.

The floodgates opened in the final frame for Mississauga as the Steelheads scored four goals in less than five minutes. The game winner came from Spencer Watson, his 13th of the season, from Tippett and Nathan Bastian at 3:09 of the final frame. At 3:58, Jacob Cascagnette would add his second in as many nights, and eighth of the season, from Michael McLeod and Jacob Moverare to bring the score to 4-2. At 5:53, Michael McLeod would add to the Steelheads’ lead, picking up his seventh of the season from Osmanski, and brother Ryan McLeod. Nathan Bastian closed out the scoring with a shorthanded marker, his 12th of the season, from Owen Tippett and Stefan LeBlanc, as the Steelheads cruised to a 6-2 victory over the Greyhounds. Goaltender, Jacob Ingham picked up his second win in as many nights, turning away 30 of 32 shots.

The Steelheads will have a day off tomorrow before heading to Sudbury to close out their northern road trip on Sunday at 2:00 PM. Catch the action live on Rogers TV cable 10 in Mississauga, or follow along on Twitter @OHLSteelheads #gosteelgo.