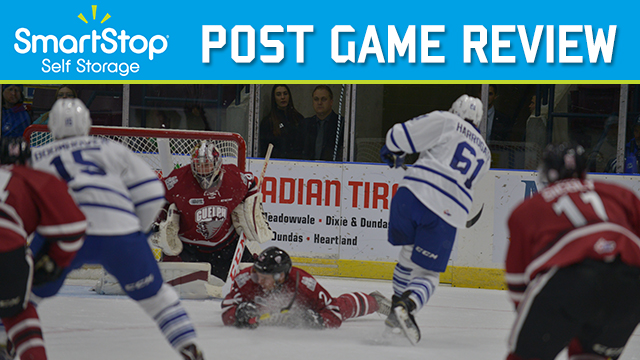 After a few days off following an exciting shootout win over the Flint Firebirds, the Steelheads looked to carry that momentum into tonight’s game against the Guelph Storm. The first 20 minutes of this game really gave the fans a show, as a total of six goals were netted between the two teams. Guelph opened the scoring early at 1:08 off a shot from Liam Stevens, assisted by Levi Tetrault and Albert Michnac. Mississauga saw some great offensive opportunities from Brendan Harrogate and Austin Osmanski, and some lifesaver defensive moves from Jacob Moverare and Shaw Boomhower. But they weren’t enough to stop Guelph from extending their lead after an unassisted goal by Givani Smith at 11:13. Less than a minute later, the momentum shifted after Harrogate’s hard work paid off and netted him a goal at 12:35, assisted by Boomhower and Stefan LeBlanc. A double penalty on Damian Bourne and Givani Smith at 14:05 opened the door for Jacob Moverare to score his first OHL goal, assisted by Michael McLeod and Nathan Bastian. With this assist, Bastian hit his 100 OHL points milestone.  A minute later at 15:28 Owen Tippett, shifted the lead to the Steelheads, assisted by Michael McLeod and Moverare. Tippett scored his second of the game at 18:44, and the eventual game winner, off an assist from Sean Day and Nathan Bastian to close out the period.

The beginning of the second saw Guelph pull Liam Herbst, and placed Anthony Popovich between the pipes. Mississauga were quickly up on a power play after a penalty from Givani Smith, and were able to capitalize. Nicolas Hague scored the Steelheads’ fifth of the night off an assist from Bastian and Tippett at 1:33. After 14 shots, and another double penalty on Brock Phillips and Damian Bourne for roughing, Sean Day scored at 9:43 off an assist from Ryan McLeod and Nicolas Hague. At 10:56 Hague took a smooth and steady shot that saw the back of the net off a heads up pass from Bastian that brought Mississauga’s goals up to seven. A check-from-behind penalty on Ryan McLeod would put the Storm on a four-on-four that allowed Nate Schnarr to squeak one past Matthew Mancina at 15:33. That shot was assisted by Garrett McFadden and Isaac Ratcliffe to put the score at 7-3.
The final frame started out again with another quick Storm penalty, this one a double minor on Luke Burghardt – two minutes for a blindside and two minutes for unsportsmanlike conduct. Nicolas Hague was able to capitalize on this power play to net his third goal of the game, off an assist by Nathan Bastian and Michael McLeod. Mississauga’s ninth goal came from Jason Smith, off an assist from Damian Bourne at 3:03. The 10th goal was fired off by Brendan Harrogate, his second of the game, unassisted at 12:21. The Steelheads’ 11th and final goal of the game was scored by Michael McLeod at 13:27 unassisted.

The Steelheads return to action on Friday October 14, travelling to Flint to face off against the Firebirds. All away games can be viewed on Rogers TV. Be sure to follow us on Twitter, Facebook, and Instagram to stay up to date with all things Steelheads.