Steelheads dominated on home ice against Bulldogs in 7-0 loss 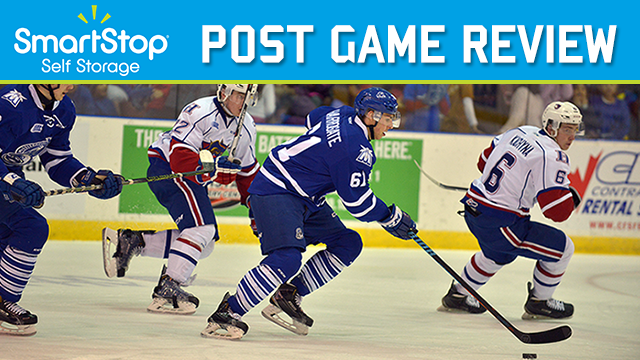 The Steelheads kick started the 2016-2017 regular season with a Home Opener against the Hamilton Bulldogs. Some familiar Steelhead faces were off the lineup for tonight, including Mike McLeod, Nathan Bastian, Sean Day, Jacob Moverare, and Austin Osmanski, as they still remain in their respective NHL prospect cities.  The Steelheads hoped to bring in a win for the home crowd, but were unable to find the back of the net, and finished the game with a 7-0 loss.

The Bulldogs took an early lead as Matt Luff fired a shot in off of a rebound from Matthew Strome, that Matthew Mancina couldn’t grab a hold of. Less than two minutes later at 7:21, MacKenzie Entwistle, assisted by Marian Studenic and Jesse Saban, brought the score up to 2-0. A late penalty from Steelheads’ Scoley Dow lead to Matt Luff’s second goal of the game assisted by Marian Studenic and Jesse Saban to close the period out at 3-0.

The final frame saw the Steelheads up a player thanks to a late penalty from Trent Fox for cross-checking but they were unable to capitalize on the advantage. No more goals were conceded in this game but Jacob Ingham did give the fans a show, saving shot after shot from the Bulldogs.

The Steelheads return to action at home on Sunday September 25 at 2:00pm against the Sudbury Wolves. Tickets are available online through Ticketmaster and at the Hershey Centre box office. Be sure to follow us on Twitter, Facebook, and Instagram to stay up to date with all things Steelheads.