Steelheads Double Up on Visiting Spirit 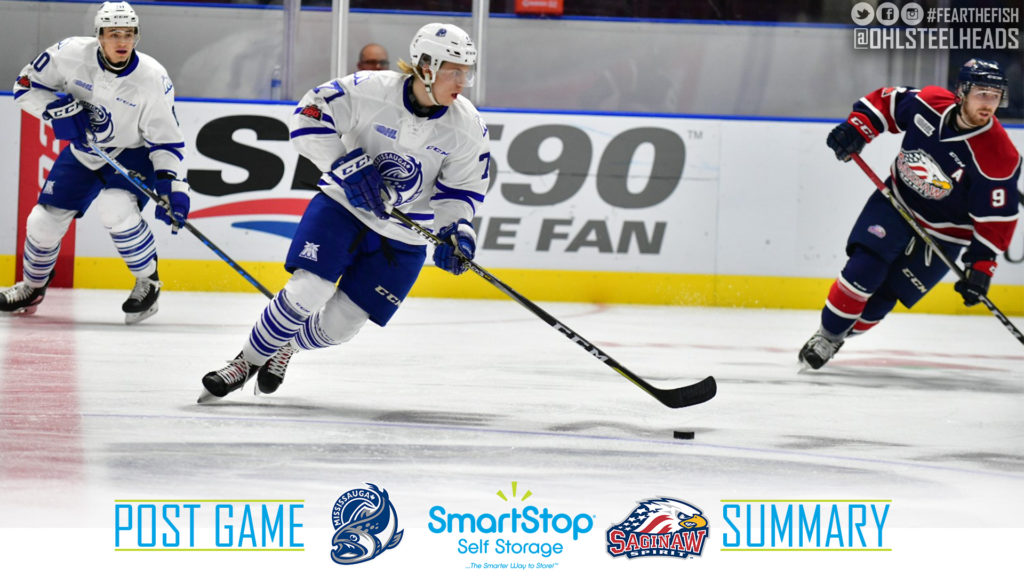 The Steelheads looked to crush spirits Friday night when they hosted Saginaw.  The visiting Spirit (6-8-2-0) looked to extend their three-game winning streak, while the Steelheads (7-9-0-1) looked for their third straight win. The first period started off slow, with minimal action. Albert Michnac continued his hot streak, getting the Steelheads on the board at 19:11. The helpers went to Owen Tippett, who wasted no time getting his first OHL point of the season following his return from the Florida Panthers, and to Jacob Moverare. Shots on goal were 15-10 in favour of Mississauga as the Steelheads held a 1-0 lead after the first 20.

Both teams started to pick up the pace in the second period. Four minutes into the middle frame, Steelheads forward Michael Little put one past Evan Cormier to put the home team up by two. Adam Varga and Ian McKinnon got the helpers on Little’s second of the season. 50 seconds later, Brendan Harrogate gave the Steelheads a three-goal cushion, with the assists to Jacob Cascagnette and Nicolas Hague. As the emotions started running high, Nicholas Canade and Kyle Bollers both saw the box for a two-minute roughing minor. Later in the frame, Saginaw’s Danny Katic squeezed one past Steelheads’ net minder Jacob Ingham cutting the Steelheads lead 3-1. Assists on Katic’s goal went to Camaryn Barber and Keaton Middleton. At 16:50, the Steelheads penalty kill unit went to work to kill off Mason Hardy’s two-minute interference minor. The Steelheads kept Evan Cormier busy in the second, outshooting the Spirit 16-6. After 40 minutes of play, the Steelheads lead 3-1.

39 seconds into the third, the Spirit’s Blade Jenkins took a tripping minor, however, the Spirit were able to capitalize on their penalty kill with a short-handed goal cutting the Steelheads’ lead to 3-2. Kyle Bollers recorded the goal and Mason Kohn picked up the assist. 13:09 into the third, Cole Scwindt took a two minute minor for slashing, the Spirit weren’t able to capitalize leaving the score at 3-2. In the final minutes of the frame, Ryan McLeod extended Mississauga’s lead to 4-2 with assists to Albert Michnac and Merrick Rippon. Owen Tippett got tripped shorty after by Keaton Middleton giving the Steelheads the man advantage. They were unable to capitalize however the Steelheads were able to keep the lead and took the two points, improving to 8-9-0-1. The final shots on goal were 38-26 in favor of the Mississauga Steelheads.

The Steelheads are back home on Sunday to host the Hamilton Bulldogs for a 2PM start.