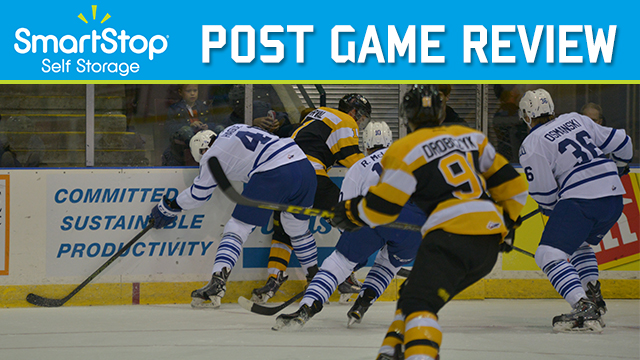 The Mississauga Steelheads hosted the Kingston Frontenacs Wednesday morning for their second school day game of the season. With over 4,000 students from around the Peel Region in attendance, the Steelheads looked to put on a show for the home crowd.

Both teams came out flying in the opening frame, and the passion showed early as Nicolas Hague and Cody Caron would each sit for two minutes with offsetting roughing calls. The Steelheads were the better team in the opening frame, outshooting their opponent 9-4, but the game remained scoreless after the first 20 minutes of play.

The Frontenacs started the second on a power play and were able to capitalize quickly as Jason Robertson potted his 29th of the season just 29 seconds into the period. Eemeli Rasanen and Stephen Desrochers picked up the assists on the opening goal. Although they had a number of quality chances, the Steelheads went 0/3 on the power play as the Frontenacs held a 1-0 lead after 40 minutes of play. Shots on goal were 18-14 in favour of the home team.

It would be Mississauga’s turn to strike early in the third as Jacob Casganette evened the score 1-1, 1:38 into the final frame. Spencer Watson assisted on Cascagnette’s 13th of the season. The game remained tied after regulation, leading to 3-on-3 overtime. The overtime frame was as exciting as always, but neither team could capitalize and a shootout would be needed to solve this game.

Spencer Watson was the only goal scorer for the Steelheads, while Linus Nyman and Nathan Billitier both scored for Kingston en route to a 2-1 victory for the visitors.

The Steelheads are back in action on Friday to host the Erie Otters at the Hershey Centre for a 7PM start.