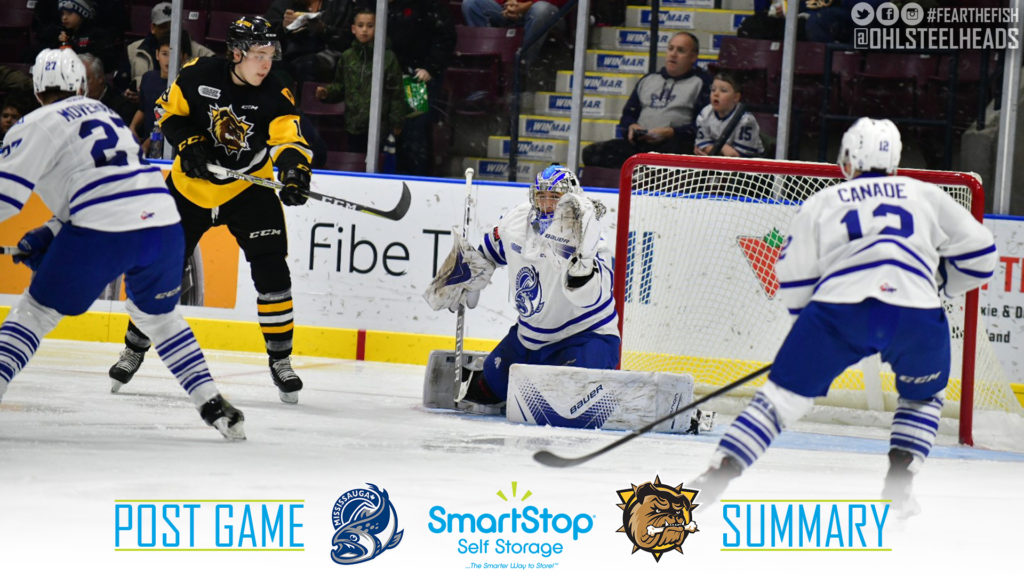 After losing the first matchup to Hamilton earlier this season, the Steelheads looked to redeem themselves Sunday afternoon against the visiting Bulldogs. It didn’t take long for the Steelheads to jump ahead as Jacob Cascagnette put one past Kaden Fulcher at the four-minute mark. Nicolas Hague and Nicholas Canade picked up the helpers. Shortly after, Owen Tippett gave the Bulldogs the man-advantage due to a tripping minor but the Steelheads’ penalty kill unit worked to preserve Mississauga’s lead and the game returned to even strength. With one minute remaining in the first frame, Arthur Kaliyev got on the score sheet for the Bulldogs tying the game at one. The Bulldogs outshot the Steelheads 12-7.

55 seconds into the second, Connor Walters sent a rocket past Jacob Ingham giving the Bulldogs a 2-1 lead. Connor Roberts and Brandon Saigeon assisted on Walters’ goal. A minute after the goal, Tippett received a two-minute minor for interference, and once again the penalty kill unit was able to keep the Bulldogs off the score sheet. A little over halfway through the second frame Tippet got sent back to the box for interference however this time the Matthew Strome was able to capitalize and extend the Bulldogs’ lead to 3-1. Marian Studenic and Benjamin Gleason picked up the helpers. 16:27 into the frame, Reilly Webb received a boarding minor and Shaw Boomhower came to his teammates rescue however that resulted in him along with Reilly Webb both receiving roughing minors. A minute into the Steelheads power play, captain Nicolas Hague shot a rocket past Kaden Fulcher cutting the Bulldogs’ lead to one. Jacob Cascagnette assisted on the goal. Shots on goal in the second were 17-7in favor of Missisauga.

Two minutes into the third Matthew Strome netted his second goal of the afternoon to give the Bulldogs a 4-2 lead. At 4:50 Matthew Strome got sent to the box for elbowing and although the Steelheads spent the majority of the power play in the Bulldogs zone, they could not capitalize. At 13:19 both Merrick Rippon and Mathew Strome got sent to the box for unsportsmanlike conduct giving the crowd some 4 on 4 action; neither team was able to capitalize. The Steelheads fought hard until the end but came up short. Final shots on goal were in favor of Mississauga 42-26.

The Steelheads are back home at 11 AM on Wednesday morning where they are hosting the Erie Otters for their first school day game of the season.