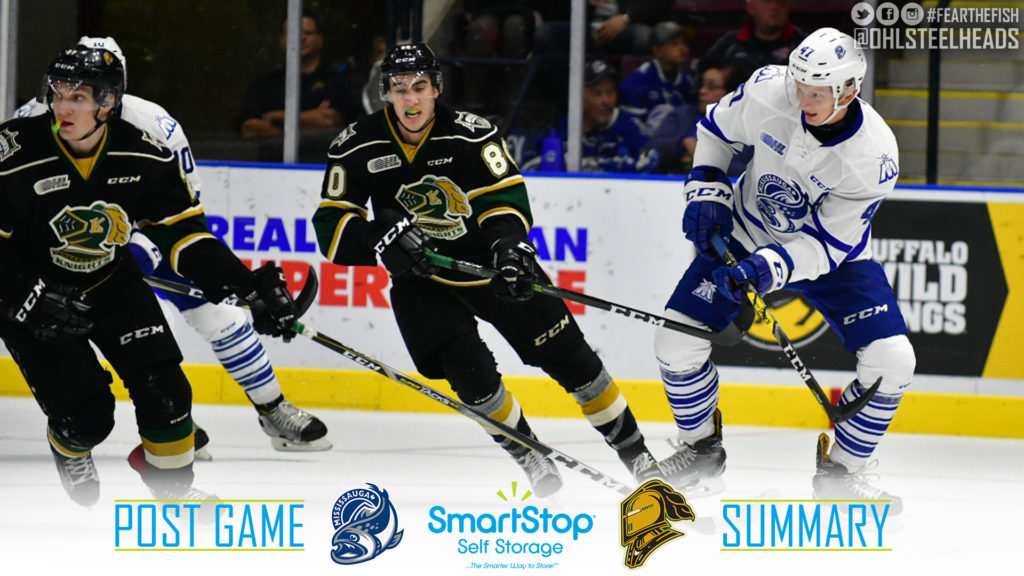 Looking to build off Friday nights momentum and string together their first back-to-back wins of the season, the Steelheads needed to come out strong Sunday afternoon when they hosted the London Knights. The opening frame saw back and forth action as each team looked to swing the momentum in their favour with the opening goal. London’s Liam Foudy notched the opening goal late in the frame from Harrison Cottam and Evan Bouchard. With two seconds to go in the opening period, the Steelheads’ fanned on a clearing attempt and the puck landed right on the stick of Robert Thomas who made no mistake beating Vella to extend the Knights’ lead 2-0 heading into the first intermission. The Knights outshot the Steelheads 10-2.

24 seconds into the middle frame, the Knights extended their lead 3-0. Evan Bouchard notched his fifth of the season, from Robert Thomas and Alex Formenton to give the visitors a three-goal cushion. Ryan McLeod finally solved Raaymakers at 8:30 of the second to get Mississauga on the board. Ian McKinnon and Nic Hague assisted on McLeod’sixth of the season. A minute after the Steelheads’ goal, London’s Alex Turko would receive a match penalty for a head check on Trent Fox. Trent Fox got up with a little assistance and returned to the game in the third period. The Knights killed off the five-minute major and kept the Steelheads off the board. Tempers flared at the buzzer and London’s Andrew Perrott and Mississauga’s Nicholas Canade were handed coincidental minors for roughing and unsportsmanlike conduct respectively. The game stayed locked at 3-1 heading into the second intermission.

The third period started off with 4-on-4 action, but neither team capitalized. At 2:32, Keean Washkurak cut the Knights lead to one. His third of the season was unassisted. Quickly after the goal, Trent Fox and Alex Formenton were sent to the box for fighting. Both teams were showing immense physicality during the third period, with London trying to keep their lead and Mississauga trying to get back in the game. London’s perseverance paid off as Sam Miletic found the back of the net to restore the Knight’s two-goal lead. With a little over three minutes remaining in the third, London’s Max Jones sealed the win, putting home his sixth of the season from Tyler Rollo and Alec Regula. At 18:13, Cole Tymkin would head to the box for hooking. The Steelheads pulled Vella giving themselves a 6-on-4 advantage. Unfortunately, the Steelheads couldn’t get anything going and fell short by a final score of 5-2. The final shots on goal were 25 for London and 28 for Mississauga.

The Steelheads will travel to Kingston on Friday and Barrie on Saturday before returning home to host the Niagara IceDogs on Sunday, October 29.