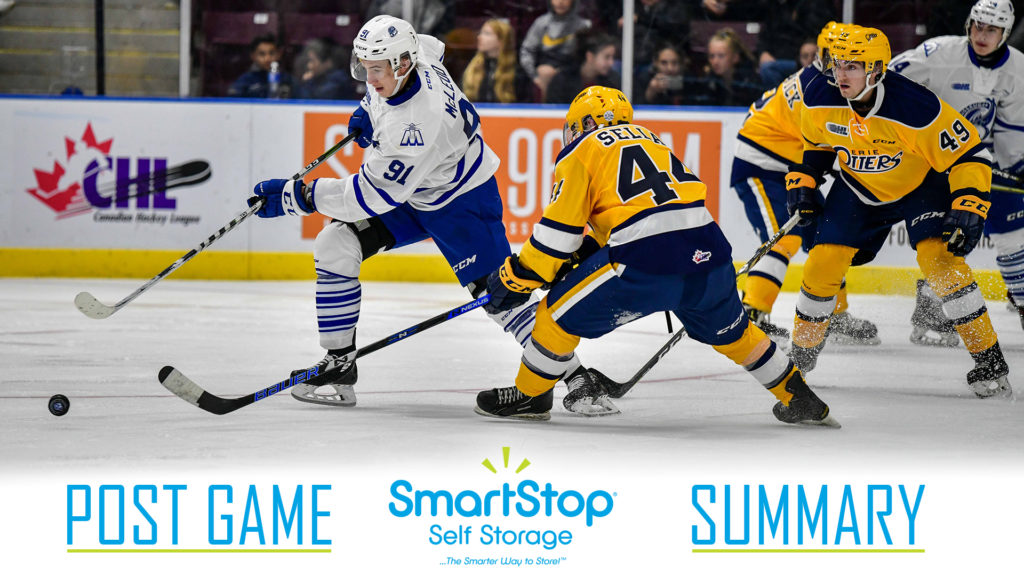 It was a nail-biter in Erie as the Mississauga Steelheads looked to find the win column after two straight losses.  The Steelheads won their first matchup against the Otters earlier this season, but the Otters were able to get their payback in their victory over the Steelheads, 5-4 in overtime.

The Steelheads had pressure going right from the get-go in the first period, with an early snipe from Owen Tippett in the first minute of the game. Although the Steelheads had most of the pressure, the Otters had their fair share of opportunities, but Ranger was there to shut the door. It took the Otters 19 minutes to find the back of the net, as Gera Poddubnyi scored to tie the game at one. 1-1 headed into the second period.

The first half of the second frame was all Steelheads. The puck didn’t seem to leave the Otters zone for the first 3 minutes of the game, as Cole Carter was able to capitalize on the pressure, scoring his 13th goal of the year. After a couple of more chances for the Steelheads, the Otters were able to get some pressure of their own with three power plays coming in the period. The Otters had their open looks, and just like in the first period with just over one minute to go, the Otters scored on a deflection from Hayden Fowler. Tied 2-2 at the end of the period.

Following the script of the first two periods, the third started with yet another quick goal from the Steelheads, this one coming from Keean Washkurak. Changing the story from the previous periods, the Otters were finally able to get on the board earlier on in the period. Brendan Sellan scored his first goal of the season to tie the game at three. Shortly after, Fowler found the loose puck in the crease for his second of the game and the go-ahead goal. But four minutes later, Tippett found the back of the net for the second time tonight, tying the game up at four a piece and it was off to overtime. Both sides were able to get some opportunities, but on a dump in by Erie, Poddubnyi challenged Ranger who came out to play the puck and got a friendly bounce as the puck tipped into the net to end the game.

The Steelheads look to bounce back against the Niagara IceDogs on Thursday after three straight losses.