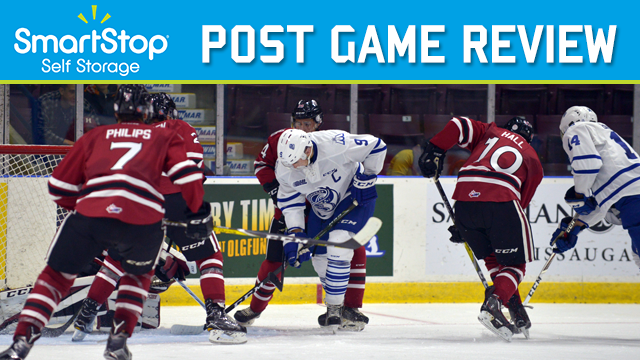 The Mississauga Steelheads travelled to Guelph Friday night, looking to snap a three-game losing streak and get back in the win column. The last time these two teams met, the Steelheads had their best outing of the season, defeating the Storm 11-3 on home ice.

Anthony Popovich and Matthew Mancina got the nod in goal in this contest. Garrett McFadden kicked things off, firing a wrist shot over Mancina’s shoulder for his fourth of the season to give the Storm a 1-0 lead at 10:20 of the first. The Storm were given their first powerplay opportunity at 12:18 as Nicolas Hague would head to the box for interference. The home team capitalized 30 seconds into the man-advantage as Jake Bricknell scored his third of the season from Isaac Ratcliffe and Garrett McFadden. Late in the frame, the Steelheads responded with a powerplay goal of their own from Shaw Boomhower to cut Guelph’s lead in half. Aidan McFarland picked up the helper on Boomhower’s third of the season. With time winding down in the frame, the Storm were able to restore their two-goal lead as Isaac Ratcliffe netted his eighth of the season to give Guelph a two-goal cushion heading into the first intermission. Despite being down by two, the Steelheads lead in shots on goal 18-12 after the first twenty minutes of play.

Jacob Ingham would enter the game to start the second as the Steelheads looked to shift the momentum in their favour. Unfortunately the Storm continued to produce as Bricknell scored his second of the game to put Guelph up 4-1. The Storm’s special teams continued to be successful, scoring their third powerplay goal at 14:13 of the middle frame to jump out to a comfortable 5-1 lead. The fifth goal came from Detroit Red Wings’ prospect, Givani Smith. Ryan Merkley and McFadden picked up the assists on Smith’s 10th of the season. Although they still trailed on the scoreboard, the Steelheads held the lead in shots on goal again this period 11-9.

The Storm extended their lead 6-1 in the third as Isaac Ratcliffe scored his second of the game at 6:26. Merkley and Cedric Ralph had the assists on the goal. The two teams exchanged a number of penalties and shots on goal before Mississauga cut the lead 6-2 on a goal from Nathan Bastian. Aidan McFarland and Shaw Boomhower picked up the assists on Bastian’s eighth of the season. Seconds later, the Steelheads would capitalize on the man-advantage as Michael McLeod scored his fourth of the season from Owen Tippett and brother Ryan McLeod. Unfortunately that would be as close at the Steelheads would come as the Storm added another goal from Matt Hotchkiss on the powerplay to skate away with a 7-3 win.

The Steelheads will have a week off before hosting the Soo Greyhounds back home at the Hershey Centre on Friday, November 25th for a 7:30 PM start.