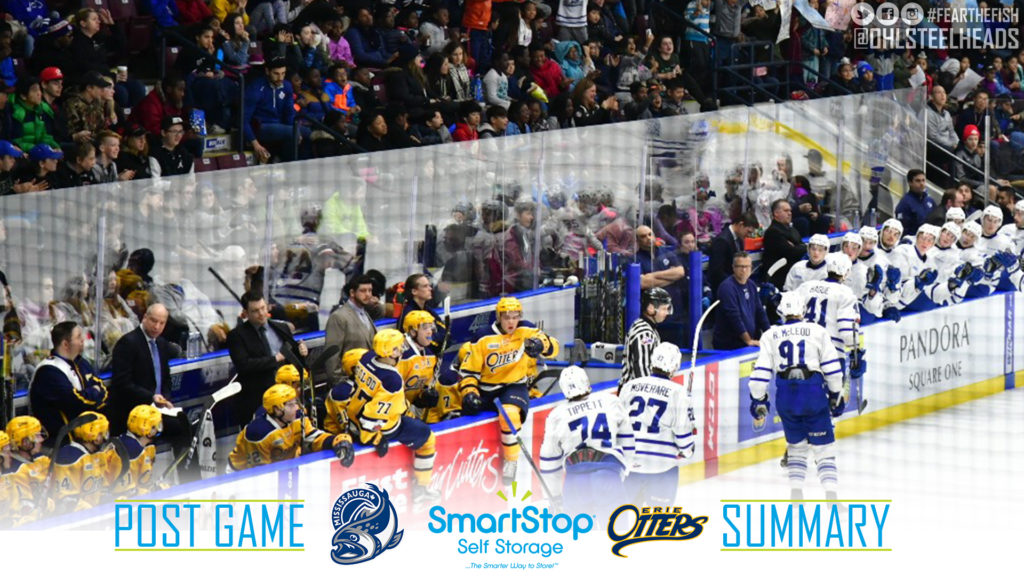 The Steelheads came into this Wednesday morning game looking for revenge in their first match-up against the Erie Otters since being defeated in the OHL Championship series. The In the past five years, the Steelheads have only defeated the Otters once, but that would change today. Nine minutes into the first, the Otters took a too many men penalty which was served by Alex Gritz. It was the Otters who struck first while being short-handed. Right winger Ivan Lodnia got the goal, the lone assist was picked up by Taylor Raddysh. One minute later, Steelheads’ forward Keean Washkurak tied the game up, assisted by Trent Fox and Jacob Cascagnette. Albert Michnac picked up the go-ahead goal at 12:09 with Owen Tippett receiving the assist. The Steelheads held a 2-1 lead heading into the first intermission and outshot the Otters 13-7 in in the first 20 minutes of play.

1:18 into the second frame, Trent Fox sent the kids into a frenzy by extending the Steelheads lead to 3-1, with helpers from Keean Washkurak and Jacob Moverare. Halfway through the frame, the Steelheads got a bench minor for too many men and the penalty kill unit went to work, keeping the Otters off the score sheet. At 16:44 Otters’ forward Partick Fellows snuck one in past Emanuel Vella keeping the game close. The assists went to Alex Gritz and Jordan Sambrook. The shots in the second were 13-11 in favor of the Steelheads, and Mississauga held a 3-2 lead after 40 minutes of play.

In the beginning of the third frame, the Otters fought to get back in it as Patrick Fellows got his second of the afternoon past Vella tying the game at three apiece. Assists went to Alex Gritz and Owen Headrick. Halfway through the final frame both Steelheads Michael Little (cross-checking) and Otters Josh Wainman (check from behind) were sent to the box, giving the crowd some 4 on 4 action. At 12:37 Steelheads’ defenceman Stephen Gibson restored the Steelheads lead, making the game 4-3. Merrick Rippon and Keean Washkurak assisted on the goal. The Otters Christian Girhiny answered Gibson’s goal tying the game back at four apiece. Jordan Sambrook got the helper. Keeping the momentum rolling, Owen Tippet got one past Anand Oberoi giving the Steelheads their lead back. Jacob Moverare assisted on Tippett’s first goal of the season since returning from Florida. 20 seconds after Tippett’s go-ahead goal the emotions started to flood through both teams resulting in a few penalties. Nicholas Hague, Trent Fox and Kurtis Henry all saw the box for roughing, but neither team was able to get on the score sheet. The Steelheads were able to give the kids what they came for as they put up a hard fight against the Erie Otters and picked up the 5-4 win. The final shots on goal were 36-33 in favor of the Otters.

The Steelheads will back on Friday evening as they host the Oshawa Generals.