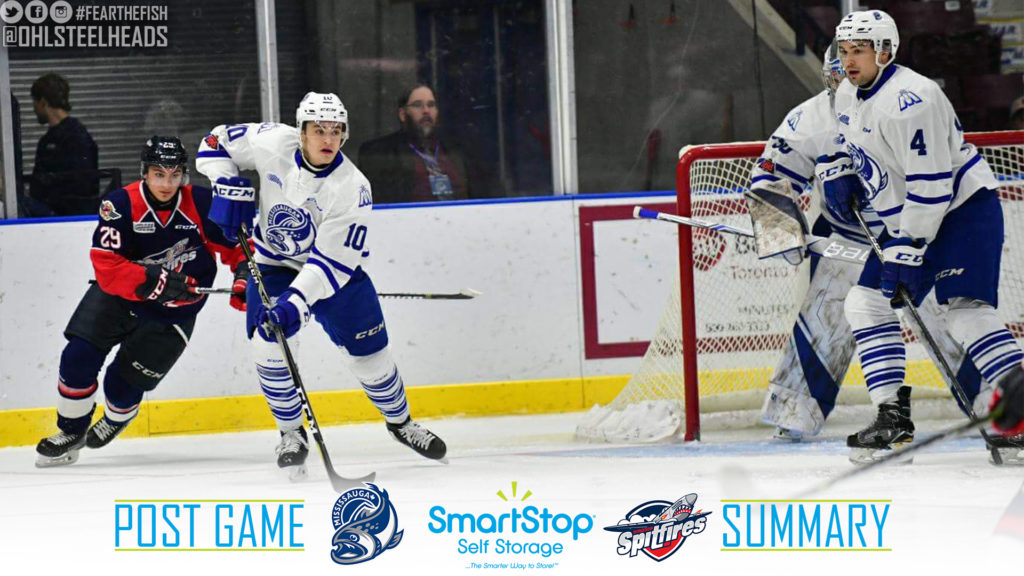 The Mississauga Steelheads made their return to the Hershey Centre Friday night, looking to bounce back from a disappointing 8-4 loss to the Hamilton Bulldogs the night before. The Windsor Spitfires, who were slightly delayed in their arrival to the Hershey Centre, came into tonight’s game riding the high of a 5-0 win over the Sarnia Sting. The Steelheads and the defending MasterCard Memorial Champions last met earlier this month, with the Steelheads edging the Spitfires 4-3.

The Steelheads didn’t get the start they wanted as the visiting Spitfires took a one goal lead in the opening frame. The lone goal of the period came from Kirill Kozhevnikov and was assisted by Austin McEneny and Adam Kadlec.

Penalties in the second period would cost the Spitfires and pave the way for the Steelheads to take their first lead of the game. At the 6:23 mark, Windsor’s William Sirman was sent off for holding. Nicolas Hague capitalized on the man-advantage scoring his 20th of the season from Owen Tippett and Ryan McLeod. At the 16:00 mark, Curtis Douglas would sit for two minutes on cross checking call. 27 seconds into the power play, Trent Fox beat Michael DiPietro to give the Steelheads a 2-1 lead. Tippett and Hague assisted on Fox’s 12th of the season. With 30 seconds to go in the frame, Cole Purboo snuck one past Ingham to even the score 2-2 and set the stage for an exciting last period.

Nicholas Canade was the third period hero, scoring an unassisted goal to restore the Steelheads’ lead and bring the score to 3-2. Canade’s third of the season was the eventual game winner as the Steelheads held on for the win.

The Steelheads will close out the first half of the season on Sunday for a New Years Eve visit to the North Bay Battalion. Puck drops at 1PM.