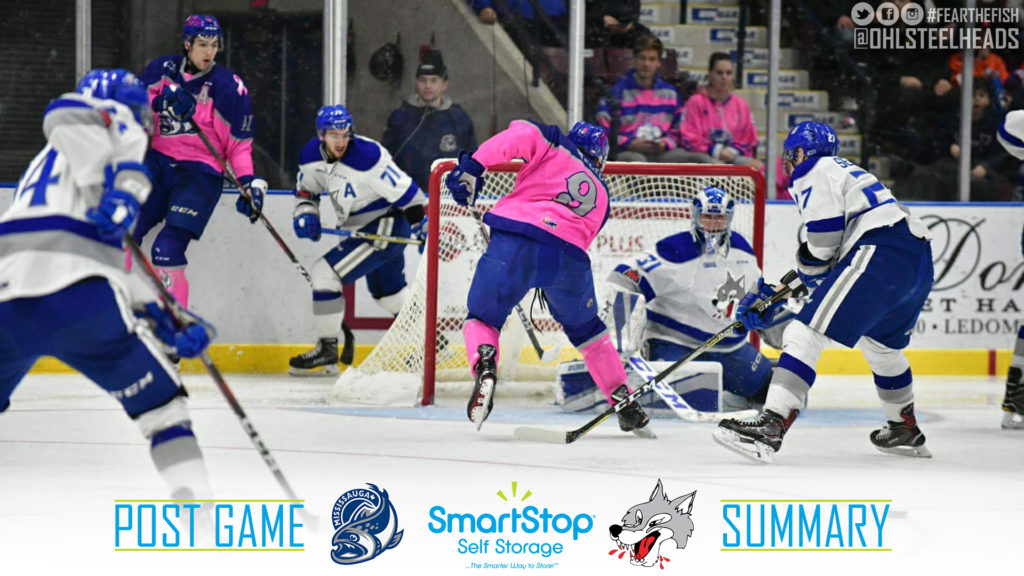 The Mississauga Steelheads faced off against the Sudbury Wolves Sunday for their annual Pink at the Rink game Sunday afternoon. The Steelheads were coming off an exhilarating victory over the Peterborough Petes on Friday, while the Wolves were looking to snap a two game losing streak.

The first period got off to a hot start, with both teams looking energized. There were no goals scored until halfway into the period when Trent Fox fired one home at 12:38 into the frame. Fox scored his 16th of the season off of assists from Mathieu Foget and Nicolas Hague. Jacob Ingham held down the fort in the crease, stopping all 13 shots fired at him by the Wolves. Mississauga was awarded with a late period power play, thanks to a tripping call against Drake Pilon of Sudbury. The Steelheads would close out the period with a 1-0 lead and would start the second on the man advantage. Shots were 12-13 in favour of Sudbury heading into the second.

The second period had a mix of everything. The Steelheads began the period on the power play, with 35 seconds left over from the first. They would not find the back of the net, keeping the score 1-0. That would change as Fox tallied another goal, scoring his second of the game to make it 2-0 Mississauga at 8:10 in the frame. Play would continue at a fast pace until Sudbury found the back of the net towards the tail end of the period. The goal was ruled no good, keeping the score 2-0 for the Steelheads. Mississauga added another goal with 13 seconds remaining, thanks to Mathieu Foget who gave them a three goal cushion. The shots were 24-18 for the Steelheads at the end of the second.

The Steelheads started off the third period with an early goal courtesy of Nicolas Hague. He found the back of the net at 2:39 into the frame. Sudbury would respond two minutes later with a goal of their own. Nolan Hutcherson netted his fourth of the season to make it 4-1. Ingham held strong between the pipes, shutting down 26 shots that were fired at him. The Steelheads were penalized at 10:02 of the period, but defended well on the penalty kill and held the Wolves to no goals. The final buzzer sounded and Mississauga got another two points, making this their fourth straight win. Final shots were 44-27 in favour of the Steelheads.

Mississauga will face of in back to back games on February 1 against the Guelph Storm and February 2 against the North Bay Battalion.