Steelheads fall 2-1 to the Generals in shoot-out 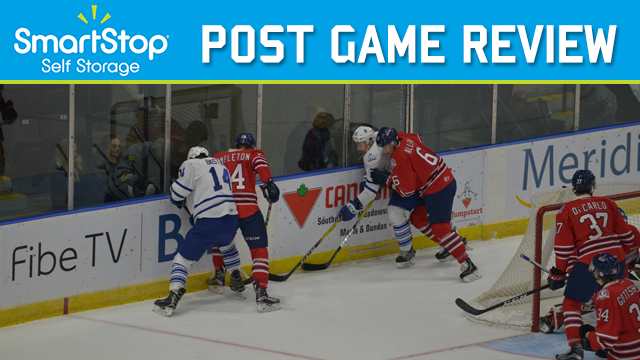 Mississauga hit home ice early today, with an 11:00 am start, for their first of two School Day Games. The Steelheads hoped to redeem themselves following Friday’s heart breaker 5-4 loss to the Oshawa Generals and give the 4,000+ School Day crowd a show.

Hungry for the win, and Aidan McFarland kick-started the first period with a barn raiser goal. Assisted by Jake Ramalho at 5:33, the Hershey Centre absolutely erupted as the various schools in attendance, went wild for their hometown team.  At the 10:00 minute mark, a holding penalty would send Stephen Gibson to the box, and allow the Generals to capitalize. 47 seconds into the penalty, Medric Mercier tied the game with a shot that managed to get by Matthew Mancina. Mercier’s sixth of the season was assisted by Anthony Cirelli and Mitchell Vande Sompel. While both teams would exchange some great chances, we would end the first knotted up at one.

The second period was a wild affair that saw three separate fights, and got this rowdy crowd on their feet. The first was between Jake Ramalho and Renars Krastenbergs at 11:59, the second was between Shaw Boomhower and Sean Allen at 14:43, and the third was between Damian Bourne and Alex Di Carlo at 15:01. All six players were booked with five minute majors. Both Mancina and Kyle Keyser were able to make some stellar saves and keep this period scoreless.

The final frame of this game was a heated one, as both teams drove to break the tie. While both teams were able to get off great shots, regulation would not be enough time to decide this one. The highlight of this period was a massive save by Mancina, as he denied a top corner shot to keep the Steelheads in the game and bring the crowd to their feet.

Despite a thrilling 3-on-3 overtime that saw incredible shots from Michael McLeod, Owen Tippett, and Nathan Bastian, this one would be decided by the goalies.  In the shoot-out, Michael McLeod and Bastian scored, but Keyser managed to stop Tippett’s shot. All three Generals, Cirelli, Vande Sompel and Krastenbergs scored, to give Oshawa the win.

The Steelheads return home on Friday, November 25th to host the Soo Greyhounds in a 7:30 PM start. The game will be broadcast live on Sportsnet. Tickets are available online through Ticketmaster or at the Hershey Centre box office.