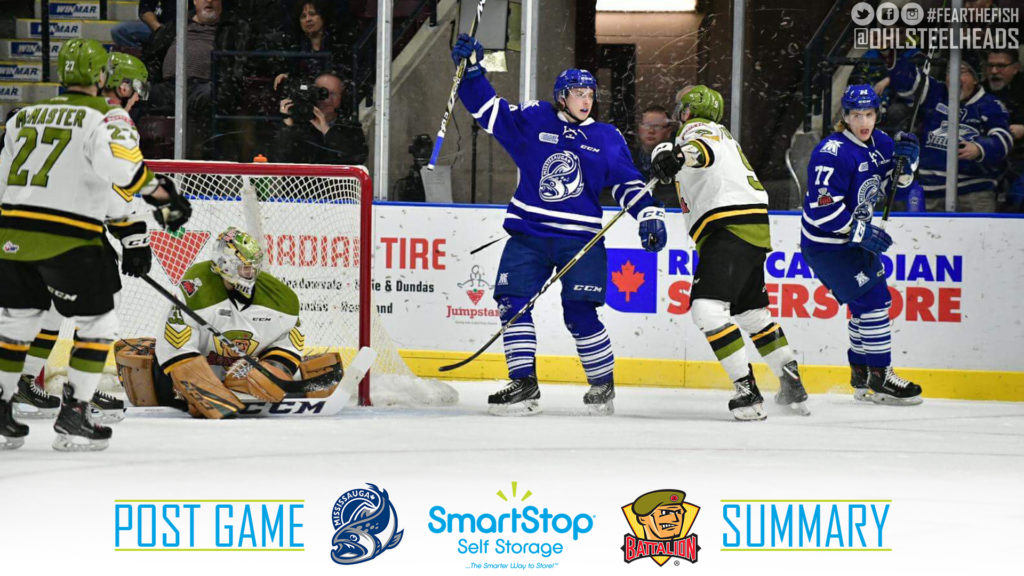 The Steelheads played in a second half of a back-to-back Friday night as the North Bay Battalion rolled into town. North Bay won nine of their last 11 games, before losing to Peterborough on Thursday night, while Mississauga was riding a five-game win streak, after beating Guelph 6-5 on February 1st.

The Steelheads wasted no time getting started, drawing a penalty less than two minutes into the first period. They did not score on the ensuing power play, but Ryan McLeod netted his 18th of the season only three minutes later, at 5:51 into the frame. Cole Carter added another to the scoreboard, notching his 13th of the season, giving the Steelheads a two-goal lead. The Steelheads headed to the defence, when Tippett was called for hooking. They defended well and prevented the Battalion from getting a shot on net. Mississauga scored once more with Carter picking up his second of the night. North Bay got a goal of their own before the period ended, cutting the Steelhead’s lead to 3-1. They added another with less than a minute to play, making the score 3-2 at the end of the period. The shots heading into the first intermission were 11 to eight in favour of Mississauga.

The Steelheads mirrored the start of the first period as they also started the second frame on the power play. The Battalion were called for hooking, but the Steelheads failed to score on the man advantage. North Bay tied the game about six minutes later, thanks to a goal by Luke Burghardt. 10 minutes later, Burghardt found himself in the penalty box, as he was called for slashing. The Steelheads would fail to convert on the power play. Michael Little was called for interference late into the period, giving the Battalion a 19 second power play to close out the period. Mississauga was held scoreless for the second period, but it wasn’t for lack of trying, as the shots were 31-17 in favour of the Trout at the end of the frame.

The Steelheads started the period with 1:39 remaining in the Little penalty. Mississauga killed it off to keep the score a 3-3 tie. There was some back and forth until Owen Tippett was called for roughing at 2:18 into the frame. The Steelheads killed off the penalty, but Brandon Coe scored seconds later, giving the Battalion their first lead of the game, making it 4-3. North Bay tallied another one, as Matthew Struthers tapped one in to net, his 14th of the season. The Steelheads’ four penalties in the third prevented them from gaining some offensive momentum, but they allowed no power play goals throughout the entire game.

When the final buzzer sounded, the score was 5-3, handing the Steelheads their first loss since January 17th.

The Steelheads will visit the Hamilton Bulldogs tomorrow night for a 7PM start.