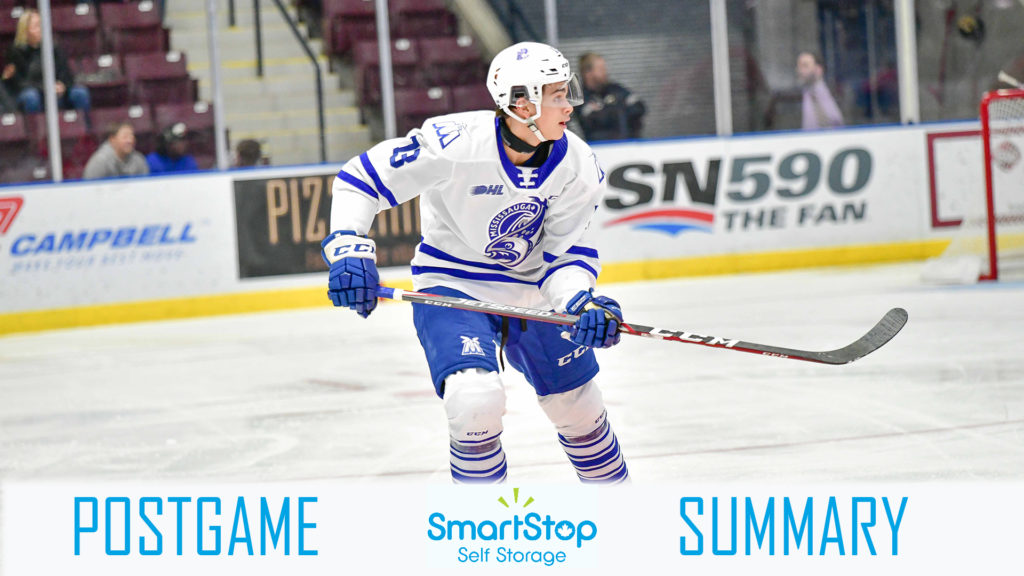 Erie, PA – The Mississauga Steelheads traveled to Erie for their second game of a 3-in-3 weekend on Saturday night.

The Steelheads entered the game coming off a 6-2 win against the red-hot Sarnia Sting, with Liam Ham recording 4 points (4A) for a new single game career high. Erie was coming off a 7-6 overtime loss to the Windsor Spitfires, where Austen Swankler and Emmett Sproule both registered 3 points each (1G, 2A).

The Otters opened the scoring, as Brendan Hoffman entered the zone and took a shot from the top of the faceoff circle that found its way past Kai Edmonds. Luca DelBelBelluz answered back for the Steelheads, dancing around Aidan Campbell to score the first goal of his OHL career. Both teams would trade opportunities on the powerplay, but the penalty killing units proved up to the task by not allowing a goal. Mississauga and Erie headed into the first intermission tied at one, with the Steelheads leading in shots on goal 15-11.

The Fish got off to a quick start in the second, as Cole Schwindt tapped home a rebound off a shot from Richard Whittaker to give the Steelheads their first lead of the game. Sarnia answered back with Mississauga in the penalty box, as Hayden Fowler redirected a low shot from Maxim Golod to make the score tied at two. Thomas Harley made a cross-zone pass to Whittaker, who made no mistake in beating Campbell to regain the Steelheads lead. LucaDelBelBelluz found Keean Washkurak on a zone entry pass, who danced around Erie’s defence and beat Campbell over the shoulder to make the score 4-2. At the end of the second, the Steelheads were outshooting the Otters 30-19.

Erie got one back to start the third period, as Brendan Sellan entered zone on a 2-on-1, stepping into the slot and firing a wrist shot past Edmonds. Mississauga nearly increased their lead, as Cole Schwindt found Nick Isaacson in front of the goal crease but was stopped by Campbell. With under two minutes remaining, Austen Swankler tied the game for the Otters as Hayden Fowler snuck a pass through the Steelheads defence. That would be all for regulation, as the teams would need overtime to decide a winner.

It was a face paced 3-on-3 overtime, as the Steelheads looked to secure the win. James Hardie entered the zone on a 3-on-1, but couldn’t find Harley on the cross-ice pass. With under a minute to go, Whittaker made a sprawling save on the goal-line to stop a trickling puck from entering the net. On the ensuing faceoff, it was Swankler who deflected a pointshot from Jamie Drysdale to win the game for the Otters.

It was a strong effort for the Fish, who walked away with a point in the overtime loss. Three Steelheads registered multipoint games, as Cole Schwindt, Richard Whittaker and Luca DelBelBelluz all had 2 points each (1G, 1A). In addition, DelBelBelluz’ goal was the first of his OHL career.

The Mississauga Steelheads will return to the Paramount Fine Foods Centre on Sunday afternoon for a rematch against the Erie Otters. Tickets to the game can be purchased by visiting the Box Office, online through ticketmaster.ca or by calling 905-502-9100.