Steelheads Fall in OT to the Battalion 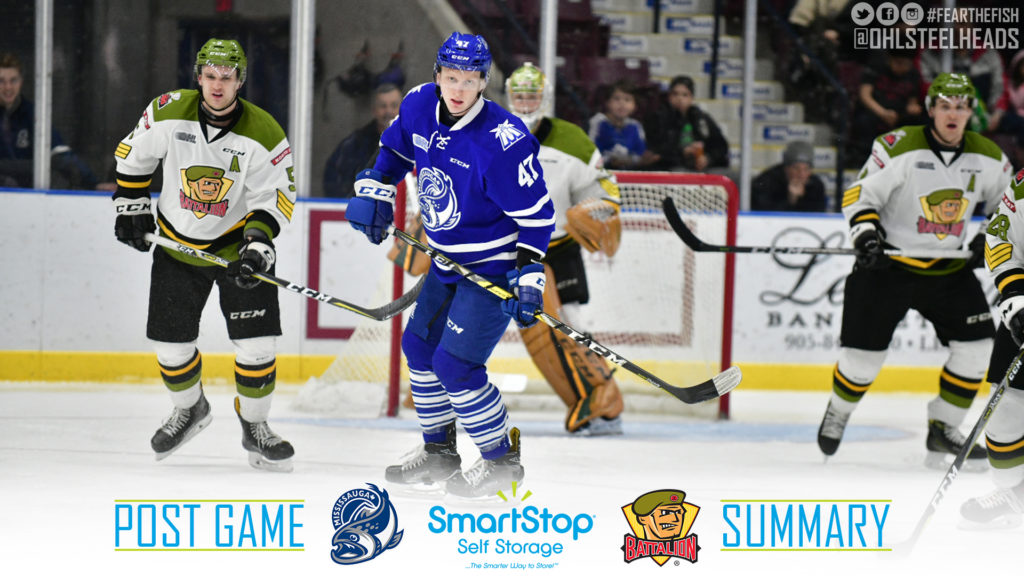 The Steelheads were in North Bay to take on the Battalion in the first of back-to-back games for the Fish. Mississauga was looking to bounce back after a 3-2 loss against Peterborough on Thursday.

There wasn’t much action in beginning of the first period – no goals or penalties until halfway into the frame. North Bay struck first and took the lead thanks to Brandon Coe, his eighth goal of the season. The Steelheads got a power play opportunity when Justin Brazeau was called for slashing at 11:03, but were not able to score on the man-advantage. They did score a few minutes later, when Owen Tippett tapped one into the net for his 24th of the season. Shots on goal were 14-9 for the Battalion at the end of the first.

The second period got off to a quicker start than the first, opening with a Battalion goal courtesy of Luke Burghardt just 3:20 into the frame. The shot marked his 26th goal of the season. About a minute later, Adam McMaster was taken down in front of the net, resulting in a penalty shot. He failed to get it past Emanuel Vella, keeping the score 3-1. Mississauga headed back to the power play when Simon Rose was called for checking from behind, then got a 2-man advantage when Propp was called for unsportsmanlike conduct, served by Brad Chenier. The Steelheads used the 5-on-3 to their advantage and Tippett scored his second of the game, bringing the Fish within one of the Battalion. The shots at the end of the frame were 26-22 in favour of North Bay.

Things slowed down in the third period, but both teams were still firing pucks at the net. Five minutes into the frame Tippett was called for tripping. The Battalion wouldn’t be on the power play for long, as Burghardt was called for high sticking only seven seconds later. The ensuing 4-on-4 action did not result in any goals. Cole Carter tallied his 15th of the season at full strength later in the period, tying up the game with 4:12 remaining. It was tied for the remainder of regulation, sending the game into some 3-on-3 overtime.

Overtime got off to a hot start, with both teams firing on all cylinders. The Steelheads had some chances, but ultimately Brad Chenier was able to tip one past Vella for his 16th of the season. North Bay took it 4-3. Final shots were 36-35 in favour of the Steelheads.

Mississauga is back in action, tomorrow afternoon, when they take on the Flint Firebirds in a Family Day tilt.