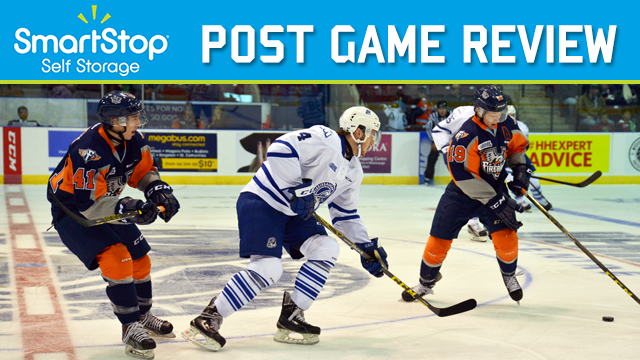 The Mississauga Steelheads travelled south of the border Friday night to take on the Flint Firebirds for their second meeting of the season. Coming off a franchise-record win that saw the Trout pummel the Guelph Storm 11-3, the Steelheads looked to carry that momentum through to tonight’s game and stay in the win column.

Mississauga got off to a rough start, finding themselves down by three after the first period. Luke Kirwan scored the first two goals for Flint at 9:23 and 12:53 to give the Firebirds an early 2-0 lead. Former Steelhead Everett Clark added some insurance late in the frame as Flint had a comfortable 3-0 lead heading into the first intermission.

The Firebirds continued to pressure early in the second, as Ryan Moore netted his 10th of the season at 1:17 to extend Flint’s lead 4-0. Minutes later, Flint capitalized on a power play opportunity when Cullen Mercer gave the Firebirds a comfortable 5-0 lead. Matthew Mancina came into the game to relieve Jacob Ingham at the midway point of the second. Things started to get chippy late in the frame and both teams took a number of penalties. With time winding down in the middle frame, Owen Tippett got the Steelheads on the board with his fourth of the season from Michael McLeod and Ryan McLeod. The Firebirds held a 5-1 lead heading into the second intermission.

The Steelheads started the final frame on the man-advantage, and it didn’t take long for them to capitalize as Brendan Harrogate and Michael McLeod set up Sean Day for his third of the season. Trailing 5-2, the Steelheads put on the pressure as they looked to cut Flint’s lead and get themselves back in the game. Michael McLeod had a huge individual effort that almost brought the Steelheads within two, but Forrest was able to keep the puck out to preserve Flint’s lead. At 8:39, Owen Tippett was able to cut Flint’s lead 5-3 with his second of the game from Michael McLeod. Late in the frame and down by two, the Steelheads took a tough penalty and were a man short. Brendan Harrogate was able to narrow the gap with a shorthanded goal, but it wasn’t enough as the Firebirds skated away with a 5-4 win.

The Steelheads continue their weekend road trip tomorrow as they visit the Saginaw Spirit for a 7PM start.