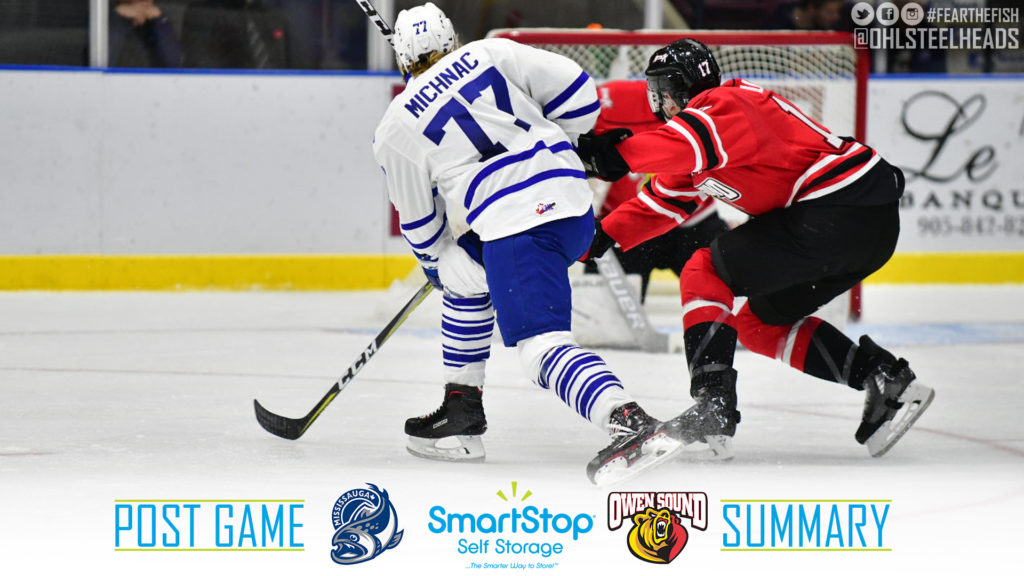 With only meeting twice in the regular season the Mississauga Steelheads looked to start their three in three weekend with a victory against the Owen Sound Attack, but just came up short. The first period started off slow with nine shots on goal for the Steelheads and 11 for the visiting Attack. The Steelheads took the first two penalties, Brendan Harrogate for cross-checking at 4:16 and Mason Hardy for tripping at 11:59. After some back and forth Markus Phillips was sent to the box for holding at 18:57. The Steelheads ended the first period on the power play and began the second with the man advantage.

The second period was very eventful, as a total of five goals were scored between both teams. Early in the frame, the Steelheads received a bench minor for too many men on the ice. With Brendan Harrogate serving the minor, the Attack capitalized and drew first blood with a goal from Kevin Hancock, assisted by Nick Suzuki and Sean Durzi. The Attack continued to build momentum and Hancock scored his second of the game at 11:19, assisted by Ethan Szypula and Markus Phillips. Aidan Dudas gave the visitors a three-goal cushion at 12:09 with assists from Daylon Groulx and Brady Lyle. Shortly after the Dudas goal, the Steelheads caught a break and were awarded a 5-on-3. Brady Lyle saw the box first with a tripping minor followed by a delay of game which was served by Jacob Friend. Utilizing this crucial moment Albert Michnac got the crowd going with the Steelheads first goal, assisted by Ryan McLeod and Nic Hague. Continuing the power play momentum Nic Hague cut the lead to one on the 5-on-4, assisted to Jacob Moverare and Ryan McLeod. The Steelheads outshot the Attack 13-11 in the frame and trailed on the scoreboard by one heading into the third.

With the game within reach for the Steelheads, they battled hard which unfortunately resulted in Micheal Little getting an interference call against him. Shortly after, Sean Durzi was sent to the box for boarding resulting on a 30 second 4-on-4. Albert Michnac used the open ice to his advantage, getting his second of the night past Zach Bowman at 12:34  to even the score 3-3. Merrick Rippon and Ryan McLeod picked up the assists. A minute later, Michnac got the crowd going with another goal giving him his first OHL career hat trick and the Steelheads a 5-4 lead. Ryan McLeod got the assist resulting in a four-point night for the 2018 NHL Entry Draft prospect. With a minute left in regulation, Owen Sound pulled their goalie and capitalized with Nick Suzuki getting the tying goal to send the game into overtime. Marcus Philips picked up the assist. Ingham stayed strong during the 3-on-3 and made some huge saves to keep the Steelheads in the game. With fourteen seconds remaining in OT Nick Suszuki headed to the penalty box for high-sticking giving the Steelheads the man advantage for the remainder of OT. With OT not solving anything, the two teams headed to a shootout. Nick Suzuki got the go-ahead goal while Nic Hague got the equalizer. After a lengthy eight rounds, Owen Sound’s Maksim Sushko snuck one past Jacob Ingham giving the Attack the two points.

The Steelheads will head to Sudbury tomorrow for a central division match-up against the Wolves before returning home to host the Peterborough Petes on Sunday at 2PM.