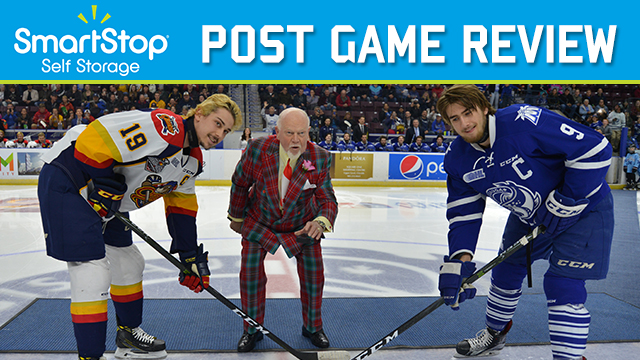 Looking to build on their Game 3 win on Monday, the Steelheads entered the Hershey Centre with an excited home crowd behind them.

The Otters came out strong to start the game and 27 seconds in, Erie’s Warren Foegele capitalized after breaking away from the Steelheads defence to score on goalie Matthew Mancina. The Otters weren’t done there as Dylan Strome and Alex DeBrincat went in alone against Mancina for Strome’s 14th goal of the playoffs. A strong penalty kill by the Steelheads would lead to Owen Tippett scoring shorthanded to cut the Erie lead down to 2-1 before the end of the first.

In a scoreless second period, Steelheads goalie Mancina stood tall, stopping 15 of the 37 shots he faced in the game, including a point blank opportunity off the stick of Darren Raddysh to keep it a 2-1 game going into the third period.

Steelheads would build off Mancina’s support in net with pressure in the Erie end to start the third. But Erie forward Alex DeBrincat along with Foegele would silence the Hershey Centre crowd once again, each scoring a goal before Steelheads winger, Owen Tippett went in alone against Otters goalie Troy Timpano to bury his second of the night making it 4-2 with less than ten minutes remaining in the third. Foegele would complete the hat-trick into the empty net to give Erie the 5-2 win in Game 4 of the OHL Championship Series. Game 5 is set for Friday, May 12 in Erie.