Steelheads fall to Otters in shootout 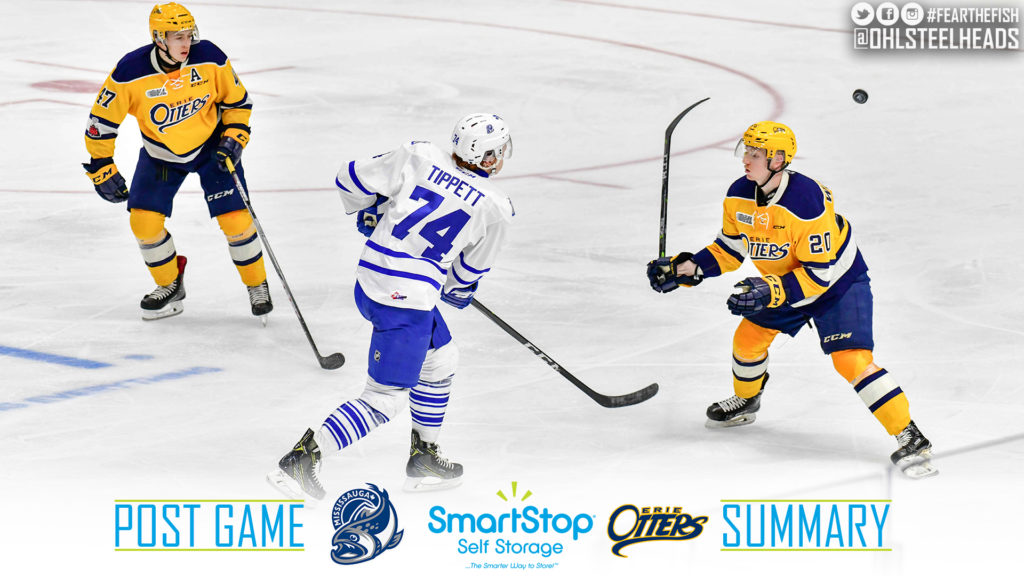 The Mississauga Steelheads came into Sunday’s away game looking for a second straight win but fell short. After losing three consecutive matches, Erie took it 3-2 in the shootout.

Mississauga and Erie came into the first equally determined and energized. Nicholas Canade was sent to the penalty box for tripping around three minutes into the frame but the Steelheads were able to defend their net. Both teams spent a good amount of time in the opposing zones and were neck and neck in shots on goal. It was late in the period when Owen Tippett scored the first goal of the game and gave Mississauga the lead. His 23rd of the season came with just over a minute left to play.

The second period was slow to start with no action until halfway through. Patrick Fellows found the back of the net to tie the game and Jack Duff’s first OHL goal four minutes later gave the Otters the lead. The Steelheads got their first power play of the game with about a minute left in the frame. Fellows was caught tripping, but the Steelheads couldn’t make anything of the man advantage. The period ended with a 2-1 lead for Erie with the shots on goal at 23-16 for the Otters after 40 minutes.

The third period saw both teams shooting equally again and going from zone to zone. Mississauga started the first 53 seconds of the frame on a power play but couldn’t take advantage. They had another chance minutes later with a slashing call against Owen Headrick but still couldn’t get that offensive pressure going. Still trailing 2-1 with just over 90 seconds to go, Mikey McLeod scored on Daniel Murphy to tie the game. Neither team was able to regain the lead by the end of regulation. Total shots on goal were 31-29 for Erie.

The hustle during regulation had the Steelheads fatigued in overtime. Tippett had a chance on a breakaway for what would have been his second goal of the game, but he lost the puck just as he was about to shoot. After five minutes, Erie and Mississauga went to a shootout.

Mathieu Foget, Nic Hague and Owen Tippett were left empty handed while Ivan Lodnia got one past Jacob Ingham and won Erie the game.

The Steelheads are heading back home for Wednesday’s 11 AM School Day Game against the Kitchener Rangers.