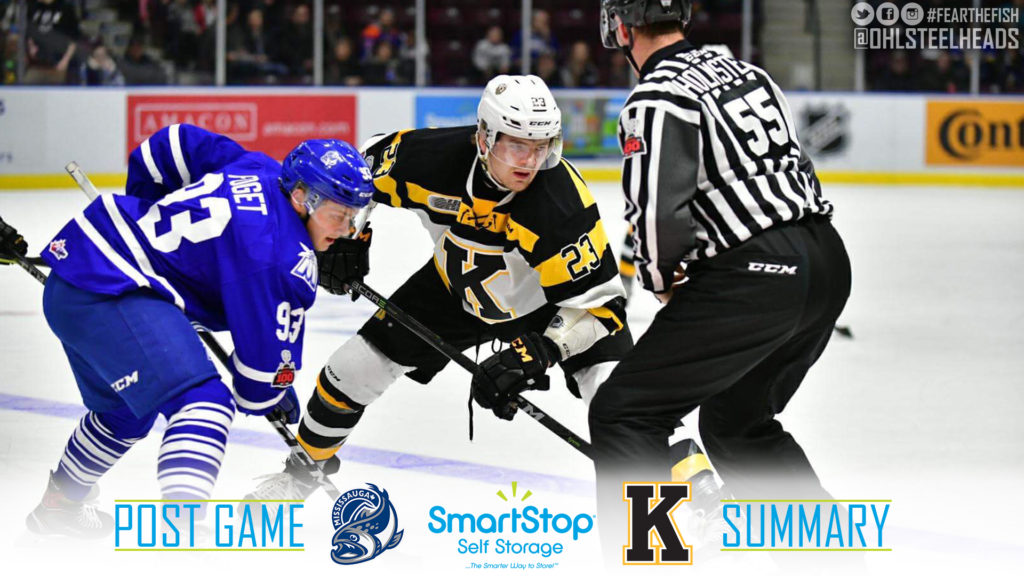 Riding the high of a 5-2 win over the central division leading Barrie Colts on Friday, the Steelheads (19-24-0-1) welcomed the Kingston Frontenacs (22-15-4-3) to the Hershey Centre for a Sunday afternoon game. The Fronts were looking to bounce back from a 3-2 loss to the Hamilton Bulldogs on Friday.

After getting the win on Friday, Emanuel Vella made his second consecutive start in goal for the Steelheads, while Jeremy Helvig got the nod for the Fronts. The period got off to a quick start, with the Steelheads testing Helvig early and often. A goal wouldn’t come until the second half of the period, with Albert Michnac opening the scoring with his 17th of the season at 13:16. The Steelheads would strike again, less than four minutes later, at 14:27, thanks to Ryan McLeod. Mississauga would add one more to close out the period, with Nicolas Hague scoring his 23rd of the season at 18:02. At the end of the first period, the Steelheads held a 3-0 lead. Shots were 15-11 in favour of the Steelheads.

The Frontenacs started strong in the second period with Jason Roberston scoring at 3:06 to get the visitors on the board. Kingston would strike again just over a minute later, at 4:03 thanks to an unassisted shot by Linus Nyman. Past the midway point of the frame, the Steelheads would respond with three unanswered goals to restore their cushion. Cole Carter scored his 12th of the season from Albert Michnac to make it 4-2. Ryan McLeod followed up with his second goal of the night and 15th of the season at 15:41 of the period from Cole Schwindt. Michael Little would tally a goal in the final 45 seconds of the frame, making it 6-2 Mississauga. Shots at the end of the second were 25 for the Steelheads and 26 for the Frontenacs.

The Steelheads entered the third period with a big lead and held onto it. An early power play opportunity came when Robertson was called for high sticking, however the Steelheads would not score on the ensuing power play. Mississauga received a penalty of their own when Hague was called for stick holding at 7:40 in the frame. The Steelheads penalty kill defended well and kept the score 6-2. No goals were scored in the final period, giving the Steelheads a 6-2 victory. Final shots were 41 for Kingston and 38 for Mississauga.