Steelheads get stung by Sarnia 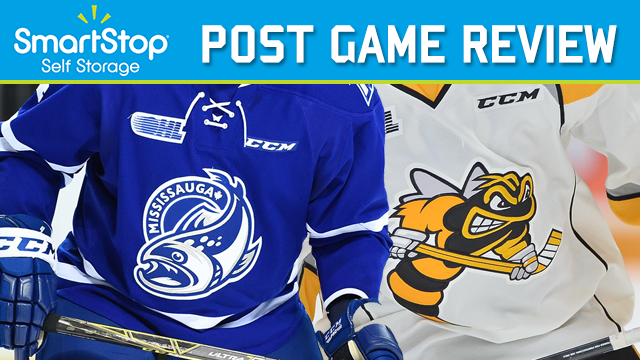 The Mississauga Steelheads returned to action Friday night for a cross-conference matchup against the Sarnia. Coming into tonight’s game, Mississauga was 5-5-1-1 and forced overtime in their last four games, while the Sting sit second in the West at 8-3-1-1.

Sarnia struck first at the midway point of the opening frame as Philadelphia Flyers prospect, Anthony Salinitri, scored his sixth of the season from Ryan McGregor to give the Sting a 1-0 lead. Although the Steelheads managed 16 shots on goal in the opening frame, Justin Fazio was the difference, turning away all shots to keep Mississauga off the board.

Keeping the momentum going, the Sting struck again early in the third as Jeff King scored his fourth of the season and the eventual game winner. Fazio continued to be the difference, turning away 12 shots to keep the Steelheads at bay. Franco Sproviero added an insurance marker at 6:40 of the third to put Sarnia up 4-1. Approaching the half way mark of the frame, Mississauga capitalized on a powerplay opportunity as Aidan McFarland found the back of the net for his fourth of the season from Stefan LeBlanc and Jacob Moverare. Unfortunately that would be it for Mississauga as Louis Latta added some cushion with his first OHL goal to seal a 5-2 victory for the Sting.

The Steelheads are back in action this Sunday as they visit the General Motors Centre for a 6:05 pm tilt with the Oshawa Generals.