Steelheads lose 5-4 in a heartbreaker to the Generals 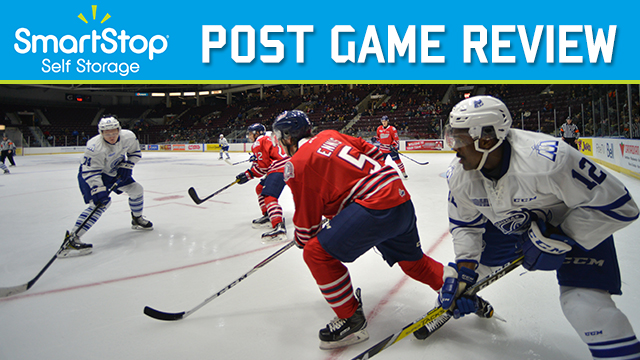 Mississauga hit home ice tonight, after an away win in North Bay. The Steelheads looked to take aim at the Generals winning streak, and claim the victory. The last time these teams battled was on October 30, when the Gens took it in overtime.

After a strong start from the Generals, the Steelheads started to pick up steam as they eased into the period. Mitchell Vande Sompel opened up the scoring at 9:52, off a pass from Eric Henderson, but the Generals would immediately concede a penalty. Ryan McLeod would capitalize on the man advantage 35 seconds into the power play, assisted by brother Michael McLeod and Aidan McFarland. The Trout would continue to turn on the jets, and it paid off. Stephen Gibson extended the Steelheads’ lead at 16:10, unassisted. A double roughing penalty would send us into the second with a four-on-four.

Oshawa tied it up quickly in the second, as Sullivan Sparkes was penalized on the breakaway. Sparkes was given a penalty shot, and took his time, roofing one in past Matthew Mancina. The middle of the frame saw both teams conceding penalties, with the lion’s share going to Mississauga, specifically Shaw Boomhower. As both teams were determined to break the tie, an unsportsmanlike conduct penalty from Boomhower, gave Oshawa the opportunity. 36 seconds into the Generals power play, Domenic Commisso scored, assisted by Riley Stillman and Renars Krastenbergs. Steelheads would respond quickly as Stefan LeBlanc would score off his first of the season. LeBlanc’s goal was assisted by Owen Tippett and Aidan McFarland. Oshawa, determined to go into the third with the lead, answered that call. With an unassisted goal from Eric Henderson, the Generals closed out the period with a 4-3 lead.

At 16:23 of the final frame, Robbie Burt scored the game winning goal, batting it out of the air past Matthew Mancina. Oshawa’s fifth and final goal was assisted by Stephen Templeton and Jack Studnicka. With time winding down, the Steelheads decided to pull Mancina, in favour of the sixth skater. The Trout were successful in keeping the puck in Generals territory determined to sink another one. The one attempt Oshawa got was from Jeremy Brodeur, who proved to everyone that he really is a chip of the ol’ shoulder, as he took a shot at the empty net. Luckily for Mississauga, it veered wide, and also drew an icing call. As Michael McLeod won the faceoff, he passed it back to Nicolas Hague, who passed it to Owen Tippett and with 59 seconds left on the clock, Ryan McLeod got the whole arena on their feet as he fired one in. With Mancina returning to the net, the Steelheads drove hard at Brodeur, determined to tie it in the dying seconds. It was a heartbreaker as the buzzer sounded, but the fans were treated to quite the show tonight.

The Steelheads will return to action this Sunday, where they face off against the Ottawa 67’s at 2pm. Be sure to follow us on Twitter, Facebook, and Instagram to stay up to date with all things Steelheads.