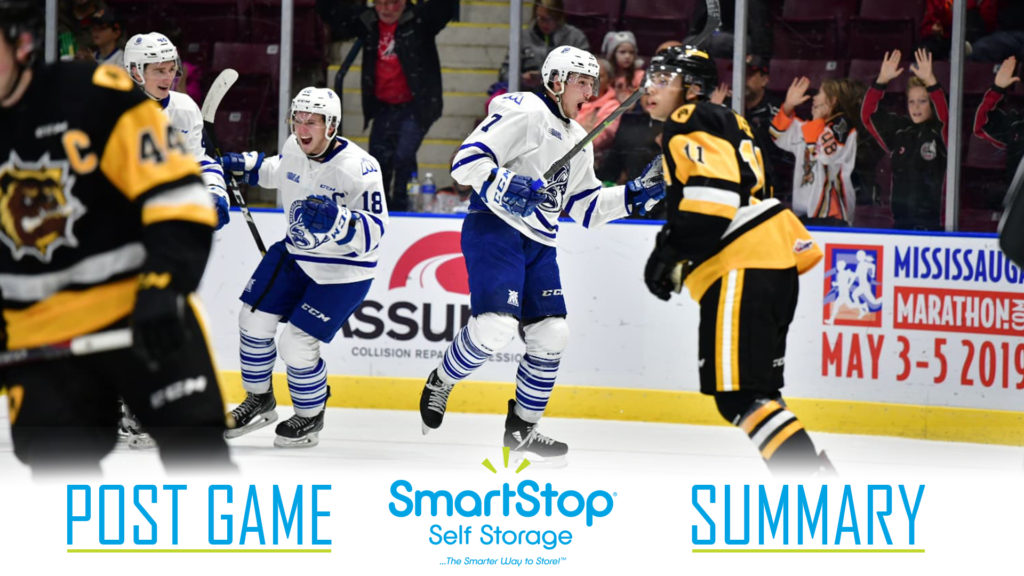 Following a week long break, the Steelheads returned to action Friday night to host the defending OHL Champion Hamilton Bulldogs. The Steelheads came into tonight’s game riding the highs of a four game win streak while the Bulldogs looked to extend their win streak to three straight.

The Steelheads didn’t get the start they wanted, finding themselves down 1-0 just five minutes into the first frame. MacKenzie Entwistle notched the opening goal for the Bulldogs, his third of the season from Michael Renwick. At 16:30, the Steelheads would see an opportunity, as Hamilton’s Kade Landry would sit for two on a boarding call. The Steelheads made the Bulldogs pay, scoring just 16 seconds into the power play to even the score 1-1. Thomas Harley scored the power play goal with assists going to Ryan McLeod and Ryan Barbosa. Late in the frame, the Steelheads converted again as Ryan McLeod beat Nick Donofrio to give the home team a 2-1 lead, but minutes later after review, the goal was called back for offside. The score stayed locked at 1-1 heading into the first intermission.

Hamilton restored their one goal lead early in the second as former Steelheads forward Jake Gravelle capitalized on a power play with his first of the season. Shortly after, the Bulldogs had a goal from Fleischer called back. Approaching the halfway mark of the game, Keean Washkurak found the back of the net to even things back up at 2-2. Nicholas Canade and Cole Schwindt assisted on Washkurak’s third of the season. Things sat tied at 2-2 heading into the second intermission.

1:13 into the final frame, Canade gave the Steelheads their first lead of the game with his first of the season from Schwindt and Washkurak. At 7:36, Liam Van Loon scored for the Bulldogs to even things back up at 3-3. With time running down and the score even at 3, the Steelheads called a timeout. Seconds after the faceoff, Michael Little found the back of the net to give the Steelheads a 4-3 lead. Cole Carter and Ryan McLeod assisted on Little’s fourth of the season and eventual game winner.

Tonight’s 4-3 win makes it five straight for the Steelheads, who will now head on the road to take on Hamilton again tomorrow before closing out the weekend in Sarnia on Sunday.