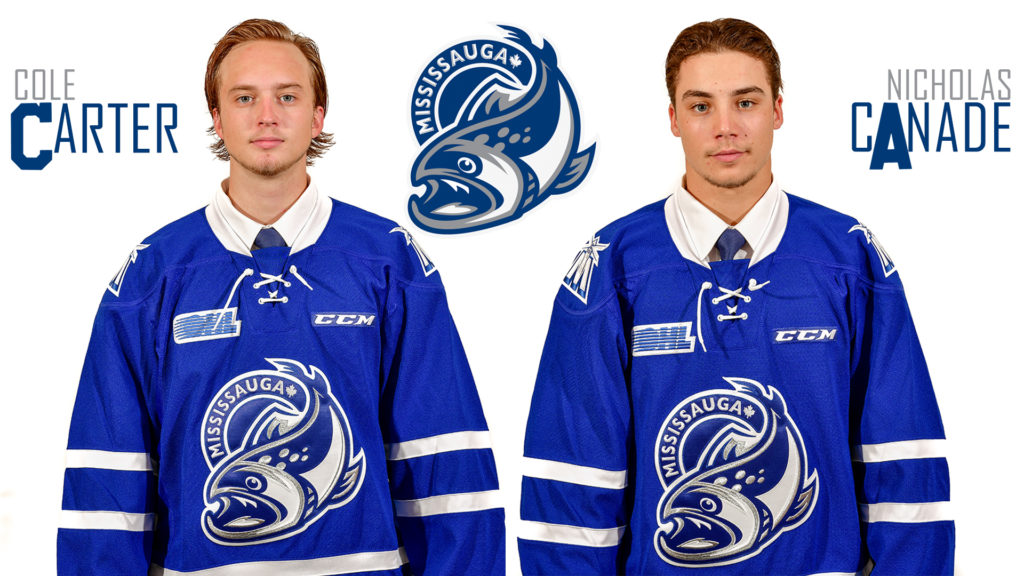 The Mississauga Steelheads are proud to announce that veteran forward, Cole Carter will take on the role of Captain for the 2018-19 season, and Mississauga native, Nicholas Canade will wear the “A” as an Assistant Captain.

Carter, a native of Orleans, Ontario joined the Steelheads midway through the 2017-18 season after being acquired from the Kitchener Rangers. Carter played his minor hockey with the Ottawa Jr. 67’s and spent time with the Stittsville Rams Jr. B. In 28 games last season, Carter registered 23 points (15 goals, eight assists) and added another five points (three goals, two assists) during the Steelheads’ first round playoff series against the Barrie Colts. Steelheads’ head coach and general manager James Richmond is pleased with the selection, adding “Cole Carter was our obvious choice as the Captain for this year’s team. He is a young man with a tremendous amount of character. Cole is well respected by his teammates and coaches because of his work ethic and attention to detail everyday he comes to the rink. Cole is a humble person that is very aware of his teammates and how the team is feeling. He plays the game with passion and the right way. He is a dedicated person to Mississauga and all the events we do as a team in the community. We, as coaches, have a great deal of respect for Cole and our communication with him has been super. We would like to congratulate Cole and his family on this honour and wish him a very successful season.”

Carter is excited for his new leadership role, adding “I am incredibly honoured to have been given the captaincy to lead the Steelheads this year. There are a lot of great leaders in our locker room and I’m grateful that I was chosen. We have a big year coming up and I am excited for the season and to have the opportunity to lead such a great group of guys.”

Canade, a native of Mississauga, Ontario is heading into his second season with the Steelheads. In his rookie year Canade registered 14 points (six goals, eight assists) in 63 games. As an Assistant Captain, he will continue to be part of the growing leadership group the team possesses. James Richmond commented, “Canade is a well-respected player in our dressing room and around the league. He plays with a tremendous amount of energy and speed that we believe epitomizes what the Steelheads are about. He is a wonderful young man. His work ethic on and off the ice is second to none. We would like to congratulate Nicholas and his family on this honour and wish him a very successful season.”

“It is both an honour and a privilege to be named Assistant Captain for my hometown team,” said Canade. “We have a hard working, passionate and character filled team who are all prepared for an exciting season. I am extremely fortunate to be surrounded by such great teammates and to be part of such an amazing organization.”

The Steelheads would like to congratulate Cole and Nicholas on their achievements and look forward to seeing the positive impact their leadership will have on the team this season.