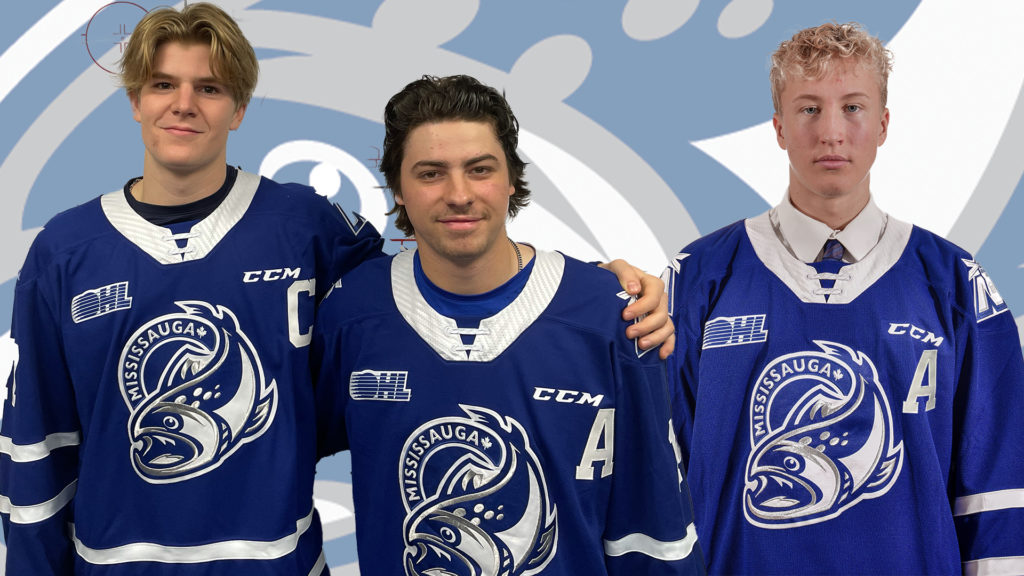 MISSISSAUGA, ON – The Mississauga Steelheads proudly announced their leadership group for the 2021-22 season on Tuesday. Chicago Blackhawks prospect Ethan Del Mastro was named captain of the hockey club while James Hardie and Ole Bjorgvik-Holm will serve as assistant captains.

General Manager and Head Coach James Richmond commented on his new leadership team. “Captains are character people both on and off the ice, and that’s exactly what Ethan Del Mastro is, a character person! He leads by example both inside our room and on the ice. He is what the Steelheads are all about, he cares about his teammates, his trainers, his equipment managers and his coaches and his work ethic is exactly what makes him a strong leader. Ethan has the trust of his coaches to do the right thing. We couldn’t be more pleased to pass on the ‘C’ to Ethan and we are confident he will be a great example for this group.

Ethan will be surrounded by two very strong character people in their own right that will wear the ‘A’, James Hardie and Ole Bjorgvik-Holm.  James, Ole and Ethan will lead this years’ version of the Steelheads with great character and determination, and we are excited to get playing hockey again.”

Ethan Del Mastro played his minor hockey for the Toronto Marlboros of the Greater Toronto Hockey League and was one of the league’s top defencemen with 44 points (8G,36A) in 73 games. The 6’5”, 210-pound defenceman was selected by the Steelheads 12th overall in the 2019 OHL Priority Selection. Prior to the cancellation of the 2019-20 season, Del Mastro registered 7 points (7 assists) in 57 games for the club playing top line defensive minutes. This past April he was selected to represent Canada in the 2021 Ice Hockey U18 World Championship in Frisco,Texas. The Freelton, Ontario native played an important role in all seven games and recorded two assists in the tournament, helping Canada to a gold medal. Del Mastro has a multitude of international competition experience and continues to bolster his resume. He has represented Canada in the World Under-17 Hockey Challenge as well as the World Selects Invitational at the U15, U14, U13, and U12 level. Adding to his list of accolades, Del Mastro was drafted in the 4th round by the Chicago Blackhawks this past July and becomes the second youngest captain in the Steelheads ten-year tenure.

Del Mastro spoke about the honour of wearing the “C” and becoming the eighth captain of the franchise. “It is a true honour to be named captain of the Mississauga Steelheads. There are a lot of great candidates on this team and for the coaching staff to look at me as a leader is something that means a lot to me. Even with the rest of our guys that aren’t wearing a letter they are still leaders in this room. I am going to do my best to lead by example on and off the ice and set a strong example for the young guys.”

James Hardie was also named to the leadership group as an assistant captain for the first time in his OHL career. The Innisfil, Ontario native was selected 8th overall by the club in the 2018 OHL Priority Selection Draft. Over his two season he has recorded 85 points (49G,36A) in 121 games. Hardie also ranked second in the OHL coaches poll as most underrated player in the 2019-20 season. This past February the left winger signed an ATO with the Toronto Marlies and in September was invited to attend Toronto Maple Leafs development camp.

Ole Bjorgvik-Holm was also named a first-time assistant captain for the 2021-22 campaign. The 6’3” defenceman was originally selected by the Steelheads in the first round of the CHL Import draft at 31st overall. He posted 2 goals and 17 assists in 57 OHL games for the Steelheads in 2019-20 while being paired against some of the league’s top players. The Oslo-native was selected by the Columbus Blue Jackets in the 5th round of 2020 NHL Draft and was the only Norwegian player to be selected. (22nd all-time). Bjorgvik-Holm also made his AHL debut for the Cleveland Monsters last season recording 5 points (1G,4A) in 16 games. He was also selected to represent Norway last spring at the IIHF World Hockey Championships.