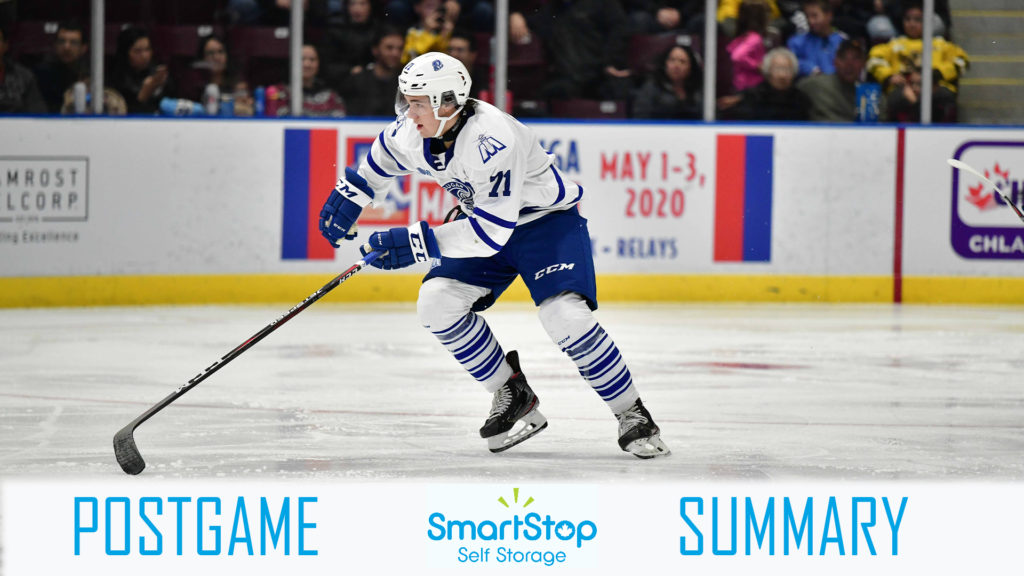 Mississauga, ON – The Mississauga Steelheads returned to the Paramount Fine Foods Centre on Friday night to take on the Sarnia Sting. The Steelheads lineup was boosted by rookie defenceman Ethan Del Mastro, who returned to the team from playing for Team Canada Black at the World U-17 Hockey Challenge.

The Fish got off to a quick start, scoring on their second shot of the game, as William Portokalis deflected a point shot from Liam Ham to put the team ahead by one. The intensity was high in the building, with both sides seeing the penalty box for after-the-whistle infractions. Sarnia scored a powerplay goal before the end of the frame to tie the game at one. At the end of the first, the Steelheads were outshooting the Sting 15-12.

Mississauga took the lead on the powerplay early in the second, as Cole Schwindt found Keean Washkurak in front of the net who beat goaltender Jordan Kooy. Ole Bjorgvik-Holm sent a pass to the slot and found Ty Collins crashing the net hard, increasing the Steelheads lead to two goals. The Fish would battle hard in a physical rest of the period, taking their lead into the third. At the end of the second, Kai Edmonds had stopped 19/20 shots on goal (.950 SV%).

The Steelheads offence continued to roll, as Keean Washkurak was sprung on a breakaway and made a nice forehand-backhand move to beat Kooy. The Sting would answer back, as Jamieson Rees beat Kai Edmonds glove-side to cut the score to 4-2. William Portokalis scored his second of the game on a behind the net pass from Nick Isaacson, while Thomas Harley added one more on a wrister from the point. The Steelheads would hold on to defeat Sarnia by a final score of 6-2.

It was a dominant win for the Steelheads, who beat a Sarnia team coming off 10 wins in their past 11 games. Captain Liam Ham registered 4 points (4A) marking a single game career high, while William Portokalis scored 2 goals for his first career multi-point game. Aidan Prueter had an impressive day in the circle, winning 19/24 faceoffs.

Following the game, William Portokalis spoke about a big team win “I think we can gain a lot of momentum from this. The past couple of weeks have been hard for us, getting a lead and keeping it, so I think this win will really help us this weekend. Hopefully we bring some of the momentum we have into our next two games.”

The Steelheads will travel to Erie for a Saturday night game, before returning to the Paramount Fine Foods Centre on Sunday at 2:00 PM for a rematch against the Otters. Tickets to the game can be purchased by visiting the Box Office, online through ticketmaster.ca or by calling 905-502-9100.