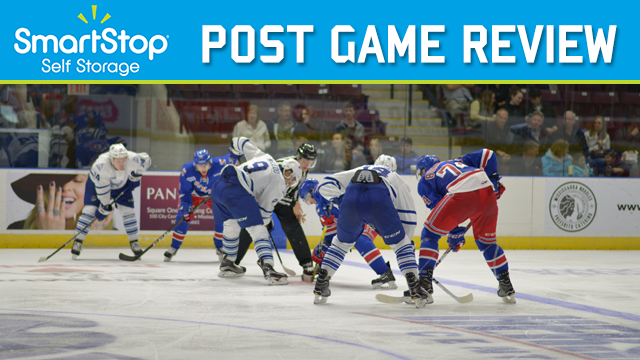 The Mississauga Steelheads continued their stretch on the road with a visit to Kitchener on Wednesday evening. The Steelheads and Rangers were both coming off wins over the Ottawa 67s, 6-3 and 5-4 respectively. In the past five years, the Steelheads have gone 0-4 at the Aud, but they would snap that record tonight, scoring four unanswered goals en route to a 5-1 win on the road.

Luke Opilka and Matthew Mancina started in goal tonight, and both were tested early in the first. Four minutes into the opening frame, Bastian sent a centering pass to Owen Tippett, but Opilka was able to get his pad down in time to keep the game scoreless. Back at the other end of the ice, Jeremy Bracco toe-dragged around Stephen Gibson, firing a shot that was stopped by Mancina. Late in the frame, Kitchener’s Darby Llewellyn would sit for crosschecking, giving the Steelheads a power play opportunity. Pressuring on the man-advantage, Vili Saarijarvi fired a shot from the point that trickled into the crease. After a brief frenzy, Nathan Bastian was able to connect and shovel the puck past Opilka to put the Steelheads on the board. Shots on goal were 10-8 in favour of Mississauga as the Steelheads held a 1-0 lead after one.

The Rangers would find the back of the net early in the second as Connor Bunnaman scored his 14th of the season to send thousands of teddy bears flying onto the ice in support of Kitchener’s annual Teddy Bear Toss. Over 10,000 bears made their way onto the ice in support of Canadian Tire’s JumpStart Foundation. Bunnaman’s goal would be the lone tally for the Rangers as the Steelheads added two in the second and two in the third. Mississauga’s second goal came from rookie, Scoley Dow from Michael Little and Stefan LeBlanc. Dow’s second goal of the season was a beautiful wrist shot from the slot that soared right over Opilka’s glove. Mississauga jumped out to a two-goal lead at 17:09 of the middle frame after Spencer Watson, making his Steelheads debut, lead the rush out of his own zone and fired a shot on Opilka, who made the original save, but was unable to pick up the rebound as Brendan Harrogate, who was following up on the play, buried the rebound for his 14th of the season. Nic Hague picked up the secondary assist on the Harrogate goal. Kitchener held a slight edge in shots 9-7 in the second, while the Steelheads lead 3-1 on the scoreboard.

Down by two with time winding down, the Kitchener Rangers pulled Opilka from the net in favour of an extra attacker. Saarijarvi was able to break things up in his own end and ice the puck into the empty net to put the Steelheads up 4-1. 12 seconds later, Owen Tippett fired a shot from the faceoff circle that soared past Opilka for his 21st of the season. The Steelheads continue their road trip with stops in London on Friday for a 7:30 PM start against the Knights, and Niagara on Saturday for a 7 PM start against their division rivals, the IceDogs.