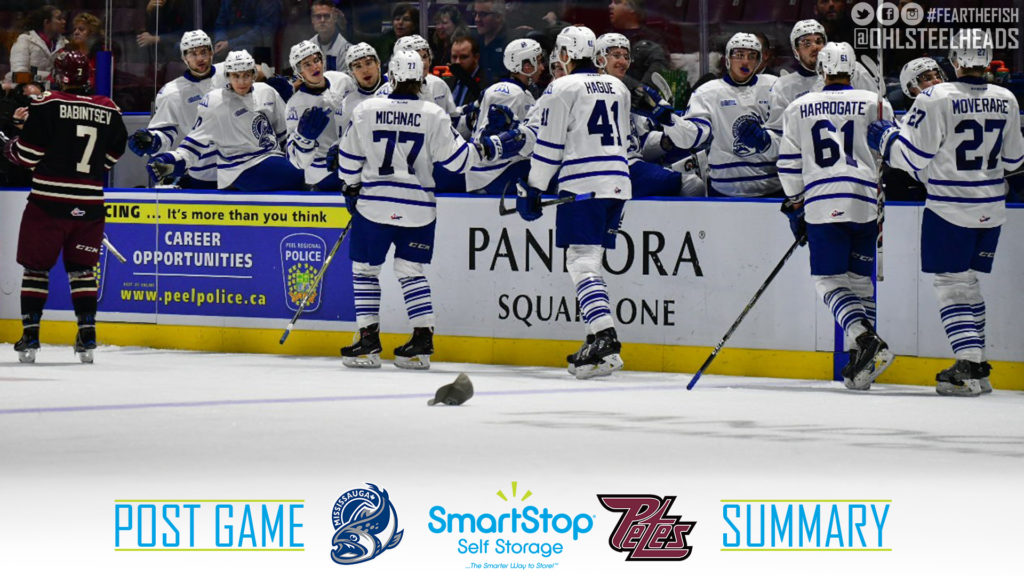 Coming off a win in Sudbury, the Mississauga Steelheads looked to continue the momentum as they faced the Eastern Conference leaders the Peterborough Petes. Albert Michnac found the net early in the opening frame to give the Steelheads a 1-0 lead just 54 seconds into the game. Brendan Harrogate and Ryan McLeod got the helpers. Pete’s Bobby Dow headed to the box early on with a boarding penalty, however, the Steelheads were not able to capitalize on the man advantage. 5:53 into the first the Petes took their second penalty, handed to Pavel Gogolev for slashing, but it was the Petes who capitalized with Christopher Paquette picking up a shorthanded goal, evening the score to one a piece. Nikita Korostelev got the assist. At 16:53 Jonathan Ang on the Petes took a holding minor which gave the Steelheads a burst of life. The Steelheads scored three times in a short 43-second span. Cole Scwindt capitalized first on the power play with assists from Jacob Moverare and Nicolas Hague. 18 seconds after Schwindt’s goal, Michael Little extended the lead to 3-1 from Nicholas Canade. Showing the Petes that they came to play, the Steelheads showed no mercy as Albert Michnac netted his second of the afternoon giving the Steelheads a 4-1 lead after 20 minutes of play. Assists on Michnac’s goal went to Merrick Rippon and Stephen Gibson. The Steelheads dominated in the first, outshooting the Petes 23 to 7.

Three minutes into the second John Parker-Jones scored a goal cutting the Steelheads lead to 2. The assists went to former Steelheads defenceman, Austin Osmanski and Matyas Svoboda. Shortly after the Petes scored, Austin Osmanski was sent off for cross-checking. Halfway through Osmanski’s penalty, Cole Fraser joined him in the box for boarding, giving the Steelheads a two-man advantages. Albert Michnac capitalized getting his third goal of the game and second hat trick in three nights, giving the Steelheads a 5-2 lead. Nicolas Hague and Brendon Harrogate picked up the helpers. 20 seconds after Michnac’s goal, Michael Little was sent to the box for a check to the head. The Petes weren’t able to capitalize and then found themselves short handed for the remainder of the second. With two seconds remaining in the period Jacob Movare sneaks one past the Petes goalie giving the Steelheads a 6-2 lead, assists to Jacob Cascanette and Shaw Boomhower. Immediately after the goal, both teams participated in some extracurriculars which saw the Petes back to the box. Jonathan Ang got sent to the sin bin for a five-minute match penalty for cross-checking. The Steelheads Nicolas Hague and Petes Adrien Beraldo also sat for two with roughing minors. Shots on goal after the second in favor of the Steelheads 40 to 10.

1:30 into the final frame the Steelheads went to work on a 5 on 3 due to the Petes Nikita Korostelev heading to the box for a slashing minor. Brendan Harrogate was able to capitalize extending the lead to 7-2, with the assists to Merrick Rippon and Jacob Movare. Ian McKinnon went to the box for a two-minute minor for cross-checking however the Petes did not accomplish anything with the man advantage. 7:03 into the third, Cameron Gaylor headed to the box for a hooking minor and it was Steelheads Nicholas Canade who capitalized short-handed extending the Steelheads lead 8-2. The second half of the third the Petes Nikita Korostelev went back to the box for a spearing minor, however, nothing came of the man-advantage. 11:08 into the third Cole Fraser received a five-minute major for fighting, it wasn’t much of a fight since he sucker punched Michael Little dropping him to the ice immediately. Jacob Cascagnette went to work on the two-man advantage giving the Steelheads a 9-2 lead with assists to Stephen Gibson and Merrick Rippon. The final shots were 62-15 in favor of the Steelheads.

The Steelheads will have a few days rest before returning to action on Friday to host the Saginaw Spirit.