Steelheads rally in the third but fall 7-4 to Battalion 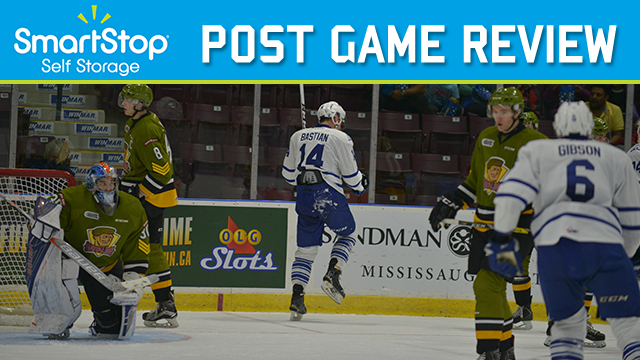 The Mississauga Steelheads welcomed back Michael McLeod and Nathan Bastian Sunday afternoon, for a matinee game against the North Bay Battalion. Coming off a 4-1 loss to the Windsor Spitfires on Friday, the Steelheads looked to get back in the win column. Although they rallied late in the third, the Steelheads were unable to complete the comeback, falling 7-4 to the visiting Battalion.

The first period kicked off with Jacob Ingham between the pipes in his first OHL start, and a team in front of him that instantly put the pressure on. Even with an impressive start to the period, the Steelheads conceded the first goal nine minutes in. North Bay’s Brad Chenier scored off an assist from Brett McKenzie and Adam Thilander. A slashing penalty from Brett Hargrave gave the Trout their first power play opportunity, but they were unable to capitalize on it. A shot from Justin Brazeau, assisted by Kyle Potts and Max Kislinger brought the score up to 2-0 and closed out the frame.  Despite a shots-on-goal count of 18-3 in favour of the Steelheads and some incredible shots from Brendan Harrogate, Ryan McLeod and Austin Osmanski, Mississauga could not find the back of the net the opening frame.

A holding penalty from Jake Ramalho opened up the second period, as well as the North Bay lead, as Brett McKenzie fired one in off an assist from Danill Vertiy and Cam Dineen. Moments later, Brett Hargrave brought the game to 4-0, assists going to David Sherman and Jacob Ball. Mississauga kept the shot momentum up and it paid off late in the period as Nathan Bastian one-timed a shot from Michael McLeod and Owen Tippett to get the Steelheads on the board. North Bay responded less than two minutes later with the eventual game winning goal from Zach Poirier assisted by Brett McKenzie. Michael McLeod’s assist on Bastian’s goal brought him to his OHL milestone of 100 points.

The final period saw a fire lit under the Steelheads as Nicolas Hague scored 30 seconds in, off an assist from Bastian and Tippet.  Four minutes in, Brett Hargrave scored his second of the game assisted by Brady Lyle. Fans didn’t see another goal until 10 minutes later, as Bastian scored his second of the game assisted by Nicolas Hague and Michael McLeod. With three and a half minutes left in the period, and up on a power play, the Steelheads pulled Ingham out in favour of an extra attacker. Zach Shankar, assisted by Adam McMaster managed to fire off a shot and claimed the empty netter. Less than a minute later, Stephan Gibson, assisted by Michael Little and Jacob Moverare, scored the Steelheads fourth and final goal of the game

The Steelheads return to action at home on Friday October 7 at 7:00 pm against the Flint Firebirds. Tickets are available online through Ticketmaster and at the Hershey Centre box office. Be sure to follow us on Twitter, Facebook, and Instagram to stay up to date with all things Steelheads.