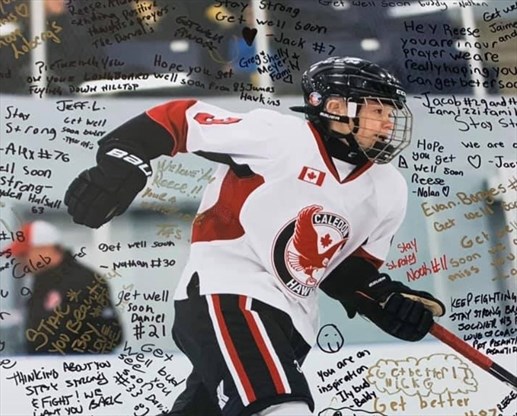 When the owner of the Mississauga Steelheads Hockey Club heard about a Caledon rep hockey player and his battle with brain cancer, he wanted to do something to help.

“I was touched by the strength of Reese and his family and by the positive energy surrounding him and the overwhelming desire by so many that wanted to help.”

Reese Meyer, 13, of Caledon East, was diagnosed with a brain tumour in November.

In less than a month, Reese had four surgeries on his brain and is currently undergoing intense chemotherapy and radiation to try to reduce the mass. He’s also doing physio to try to bring back some of his physical function.

Kerr decided to donate ticket sales for the Mississauga Steelheads game on Sunday January 26th against the Kitchener Rangers to the Meyer family.

Kerr connected with Katrien Mooney, a friend of the Meyer family and whose daughters play on the same hockey team, to make arrangements for the ticket sales for the game.

“She is a power of support of Reese and his family,” Kerr said. “She truly is a caring, thoughtful, generous person.”

Glenn Meyer, Reese’s dad, said getting out of the hospital and being able to go drop the puck at the game — whether he has to crawl, walk or skate onto the ice — has become a goal for his son.

“It has given him a date and goal to focus on when discouraged or in pain while enduring treatment and physio at once,” Meyer said.

Kerr, who lost his wife when his twins were only a year old, said he would not have been able to make it through without so many reaching out to offer him support.

“The hockey community is one amazing community,” Kerr said.

The game is Sunday, January 26th at 2 p.m. Tickets are $20 and 100 per cent will go to the family. Tickets are available on Eventbrite or by sending an etransfer to steelheads4reese@gmail.com.

Other ways to get involved:

• A bank account for Reese with an email attached for e-transfers (jt.meyer@outlook.com) has been set up for direct support for the family during their time in hospital and with recovery.

• MVS Design, a Bolton company that creates hockey gear for the local teams has created hats that say “Go Reese Go” All net proceeds will go to the Meyer family. The toques are $19.99.