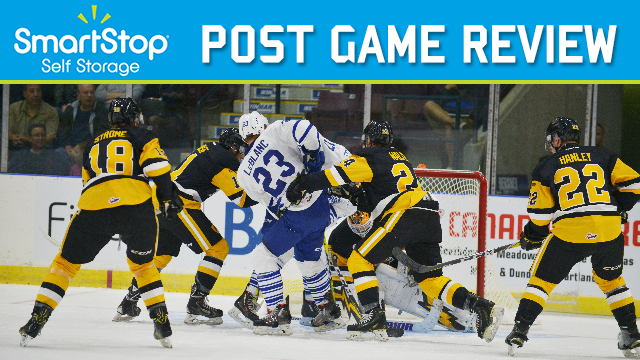 Coming off a tough 7-4 loss at home, the Steelheads travelled to Hamilton for round two of a home-and-home with the Bulldogs looking to bounce back and earn their fifth straight road win.

The Bulldogs struck first just past the half way mark of the opening frame. Hamilton’s Jack Hanley fired a shot from the faceoff circle that was stopped by Mancina, but former Steelhead, Luke Kutkevicius was right on the doorstep to bury the rebound and give the Bulldogs a 1-0 lead. Connor Walters picked up the extra assist on Kutkevicius’ third of the season. Not to be outdone, the Steelheads would answer back with 5 minutes remaining in the frame following a huge individual effort by defenseman, Nic Hague. Hague pinched deep into Hamilton’s zone and beat Fulcher to the post with a wraparound goal. Jake Ramalho and Michael Little assisted on Hague’s 12th of the season. Minutes later, the Steelheads would take the lead as Scoley Dow netted his fourth of the season on the power play, from Jason Smith and Brendan Harrogate.

The Bulldogs outshot the Steelheads 13-11 in the middle frame, but were unable to even the score as Mississauga held a 2-1 lead heading into the third period.

Early in the final frame, the Bulldogs were able to find the back of the net as Adam Laishram showed incredible patience, waiting out Mancina before going top shelf with his fourth of the season. Trent Fox and Justin Lemcke assisted on the goal. At 4:12, the Steelheads would capitalize on the man-advantage again and restore their lead as Ryan McLeod went end to end before ripping a shot from the slot that beat Fulcher glove side. The Bulldogs were not going to let up as they responded with their own power play goal from Laishram, his second of the night, from Lemcke and Michael Cramarossa. With the score knotted at 3-3, the Steelheads continued to pressure and were able to capitalize on the man-advantage again to restore their lead. The eventual game-winner came from Owen Tippett who finished off a beautiful passing play from Stefan LeBlanc and Ryan McLeod. The Steelheads were able to hold off the Bulldogs for the remainder of the period to seal a 4-3 victory and their fifth straight road win.

The Steelheads are back home at the Hershey Centre tomorrow to host the Ottawa 67’s in their annual Teddy Bear Toss game at 2PM.