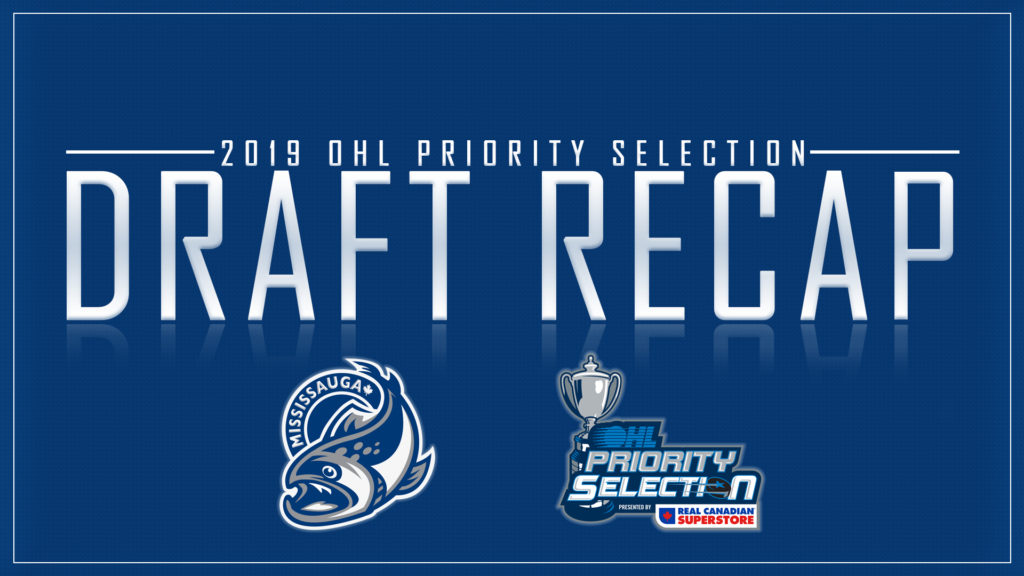 Mississauga, ON – The Mississauga Steelheads selected 14 players in the 2019 OHL Priority Selection including first rounder Ethan Del Mastro of the Toronto Marlboros.

Del Mastro, a 6’1” left-shot defenceman put up eight goals and 36 assists in 73 games in his minor midget season in the GTHL. The Toronto, ON native drew parallels between Del Mastro and current Steelheads defenceman Thomas Harley.

“Ethan Del Mastro is a big left shot D-Man that likes to play physical… a smooth skater, moves the puck well and plays with a competitive edge” said HC/GM James Richmond of his first round selection.

Del Mastro said of the Steelheads, “I can’t wait to get started, it’s such a great organization to play for and I’m ready to be a part of it.”

At 51st overall, the Steelheads selected Luca Del Bel Belluz of the Toronto Red Wings. The Woodbridge, ON native tallied 32 points in 30 games in the 2018-19 season.

Of his first pick in the 3rd round HC/GM James Richmond said, “He’s a centreman that plays up and down the middle of the ice, he’s growing… very good in the faceoffs and plays with pace.”

“It was always a dream of mine to get drafted to the OHL and I couldn’t be happier to get picked by the Mississauga Steelheads” said Del Bel Belluz of his selection to the Steelheads.

The Steelheads then used back to back picks on Chas Sharpe of the North Central Predators and Joshua Reid of the Pembroke Lumber Kings. Sharpe is a right shot defenceman from Orillia, ON who stands at 6’2”.

“Chas brings a physicality, he moves the puck well, he reads the game well….he can protect that right side for us” said James Richmond of the 60th overall pick.

Joshua Reid is right-shot centreman who recorded 45 points in 42 games playing up an age group with the Pembroke Lumber Kings. The Petawawa, ON native stands at 5’8” and 146 pounds.

“Smaller in stature, but he plays more like Brad Marchand, over a point a game, plays with a bit of an edge” said James Richmond of his final selection in the 3rd round.

The Steelheads next pick in the 6th round at 114th overall, was used on Adam O’Marra, a Mississauga native who played his minor midget hockey with the Oakville Rangers of the OMHA. In 32 games, O’ Marra recorded 20 goals and 23 assists. Being selected by the Steelheads meant just a little bit more to Adam, as the O’Marra family are longtime supporters of the team having been with the Steelheads since their inception and season ticket holders.

“It’s such a huge honour… I’ve been watching the Steelheads as long as I can remember, it’s just a great feeling and I’m happy to be a part of the Steelheads.”

With two more selections in the 7th round, the Steelheads added another physical presence defenceman Drew Jeffers and goaltender Justin Dilauro from the Whitby Wildcats. Jeffers, a Michigan Native played with Compuware’s U16 stands at 6’4” and 205 lbs. Dilauro played in three games at the OHL Cup posting a 2.95 GAA.

The Steelheads would make five more selections in the rest of the draft;

Riley Rosenthal, a 6’2” defenceman and native of Boca Raton, FL who played with the South Florida Hockey Academy U16 scored 54 points in 50 games was selected in the 9th round at 174th overall by the Steelheads.

Callum Chisholm, selected 194th overall is a 6’3 left winger who played his minor midget season with the Richmond Hill Coyotes. The big winger scored 18 goals and nine assists in 32 games in the 2018-19 season.

Tye Scott, selected in the 11th round, was the 2nd Mississauga native to be selected by the Steelheads. A 6-foot defenceman, Scott scored one goal in six games with the Mississauga Rebels at the 2019 OHL Cup.

Ikki Kogawa, selected in the 12th round – 234th overall, started his hockey career in Chiba, Japan but suited up with the Toronto Nationals of the GTHL scoring 11 goals and 11 assists in the 2018-19 season.

Sean Mateer, a 5’8’ centreman from the Markham Waxers was taken at 254th overall in the 13th round. In 27 games with the Waxers, Mateer tallied 19 points.

Connor Driscoll, a Kleinburg, ON native was selected in the 14th round, 274th overall. As a member of the Toronto Nationals in the GTHL, the right-winger scored 10 goals in the 2018-19 season.

With their final selection of the 2019 OHL Priority Selection, the Mississauga Steelheads selected Wade Bolton of the Central Ontario Wolves. In 34 games, in the 2018-19 season, the left shot defenceman recorded three assists.

“We want to congratulate and welcome our fourteen draft picks today. They all should be proud of what they have accomplished through their minor hockey experiences. We believe we were able to select some real strong prospects today at the OHL Priority Draft. We got a strong mix of players that address some of our needs throughout our lineup. We look forward to seeing all of our new prospects at our camp on April 20. Again, congratulations and welcome to the Steelheads family!”

Stay tuned throughout the week to our social media channels and website for more content regarding the Steelheads’ 2018-19 selections!