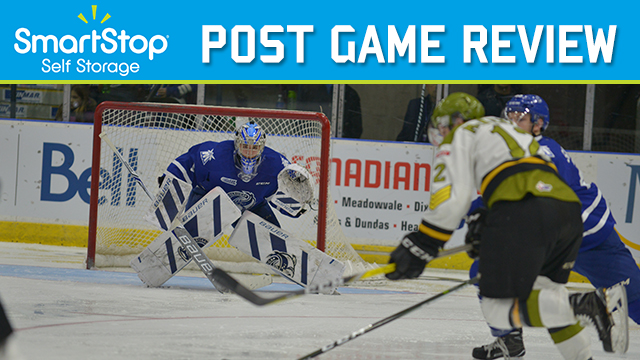 Following a 6-4 win over the Niagara IceDogs, the Steelheads hosted the North Bay Battalion for their second divisional matchup in as many days. The Steelheads have come out on top in these team’s previous three meetings, and looked to continue the trend tonight.

Vili Saarijarvi got things going with two quick goals to put the Steelheads up 2-0, within the first five minutes of the opening frame. Both goals were assisted by Owen Tippett, with a secondary assist on the second goal by Jacob Moverare. Saarijarvi now has a total of ten goals this season. Shots on goal to end the period were 8-6 in favor of Mississauga.

Shaw Boomhower netted his sixth of the season in the second period to put the Steelheads up by three. Stephen Gibson picked up the assist on the lone goal of the frame. Shots on goal, 12-14, once again in favor of Mississauga as the Steelheads held a 3-0 lead after 40 minutes of play.

Early in the final frame, Spencer Watson put home the fourth goal of the night for the Steelheads, and his 17th of the season. Ryan McLeod and Jacob Cascagnette picked up the assists. The Steelheads continued to battle throughout the third and eventually got the win as goaltender Jake Ingham stood tall for the shutout.

The Steelheads are back at home on February 10th to host the Hamilton Bulldogs, but will first hit the road to take on the Barrie Colts on February 9th.