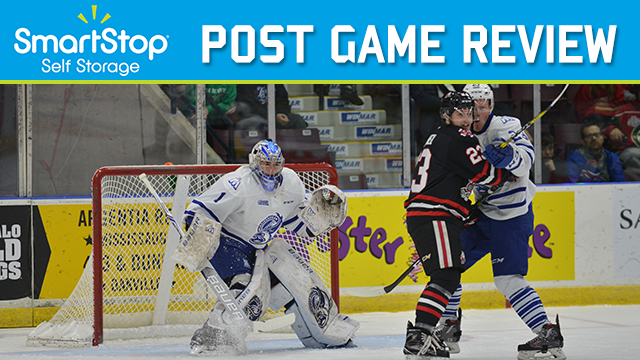 In the last home game of 2016, the Steelheads faced off against the Niagara IceDogs in a central division matchup. The Trout last met with the IceDogs on December 10th in Niagara where they won 3-2 in overtime. In a coincidence that you only seem to find in sports, their other meeting with the Dogs this season, was the Steelheads last win on home ice. This was back on Friday, October 21st in a 6-5 overtime win. Fans were on edge, hoping for a reprieve from the home-game winning drought in their beloved ‘pond’.

The first period started off with a quick penalty against Nathan Bastian. He was booked 13 seconds in for a check-to-the-head. Mississauga was able to kill the penalty easily, even getting great short-handed opportunities from both Austin Osmanski and Spencer Watson. At 17:39, Boomhower was sent to the box for high-sticking, to give the IceDogs their second power play of the game. Once again, Watson was able to overturn the puck to make a great drive to the net. Despite the lopsided nine to three shots on goal, neither team was able to get the puck between the pipes in this period.

Another quick power play was awarded in this period, as Niagara’s William Lochead was sent to the box at 1:14 for cross-checking. While both teams were able to extend their shot count, this period belonged to penalties, as both teams racked up a combined ten minutes between them. At 11:43 Hayden Dave was called for roughing against Shaw Boomhower, and then at 12:12 Ryan Mantha was called for cross-checking. While the Steelheads were up two men, the double advantage did not last long, as Ryan McLeod was also sent to the box. His interference call came in at 13:12. Another Niagara penalty at 19:07, holding from Johnny Corneil, would send the Trout into the third with the man advantage for a minute and seven seconds.  Owen Tippett found Nathan Bastian’s rebound and managed to bat the bouncing puck into the back of the net. His 27th of the season, was also assisted by Stephen Gibson. Lochead took his second penalty of the game at 4:09 for hooking, but the advantage was quickly negated as Tippett was booked for interference. At 7:18 IceDogs’ centre, Ben Jones was called for hooking, and it opened up the door for another Steelheads goal. Off an assist from Bastian and Gibson, Watson was able to net his ninth of the season. Par for the course in the game, we had another double penalty, these one’s going to Boomhower for un-sportsman-like conduct, and Ondrej Machala. With time winding down on the clock, the IceDogs pulled goaltender Stephen Dhillon, and at 1:33 Boomhower walked in an empty netter to bring the score to three. His fifth of the season was unassisted, and would close out the game.

A huge shout out to rookie goaltender Jacob Ingham on his first career OHL shutout. Ingham stopped 23 shots for the win at home.

The Steelheads will hit the road early tomorrow to face off against the North Bay Battalion. The New Year’s Eve game will start at 1:00pm, and you can catch it on RogersTV. Be sure to follow us on Twitter, Facebook, and Instagram to stay up to date with all things Steelheads.