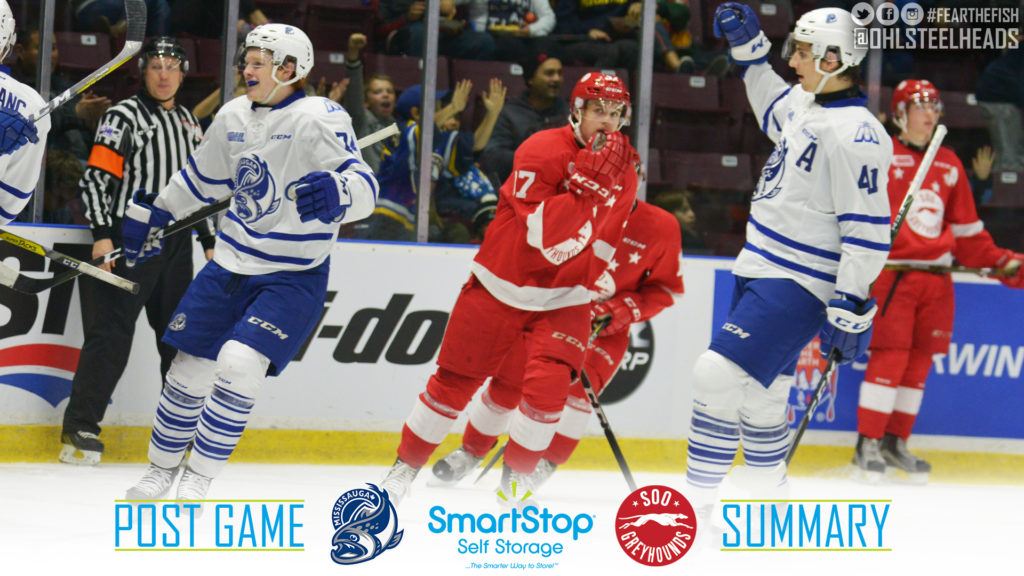 Coming off a 5-3 win over the Erie Otters last night, the Steelheads looked to keep things rolling in their second game of 2018. A win tonight would not be an easy feat as the Steelheads played host to the top team in the CHL, the Sault Ste. Marie Greyhounds. Coming into tonight’s game, the Soo (32-3-2-0) were riding the high of a 23-game winning streak that the Steelheads hoped to snap.

The Steelheads definitely got the start they wanted as Owen Tippett scored just 27 seconds into the opening frame to give his team an early 1-0 lead. Mathieu Foget, appearing in only his second game for the Trout, assisted on Tippett’s goal. Minutes later, Sault Ste. Marie’s Morgan Frost would head to the box to serve two minutes for cross checking. Mathieu Foget, Michael Little and Owen Tippett connected on the ensuing power play as Tippett scored his second of the night to put the Steelheads up 2-0 in the first five minutes of play. Late in the frame, Greyhounds’ forward Hayden Verbeek would take a cross checking penalty, giving the Steelheads another opportunity on the man-advantage. Nicolas Hague and Ryan McLeod set up Tippett on the power play, who made no mistake beating Tyler Johnson with his third of the night and first career OHL hat trick. Tippett’s three goals gave the Steelheads a three goal cushion heading into the first intermission.

The second period started with a goalie change for the visiting Greyhounds as Matthew Villalta came in to relieve Tyler Johnson. At the 8:00 mark the Greyhounds got on the board with a goal from Keeghan Howdeshell. Hayden Fowler and Anthony DeMeo assisted on Howdeshell’s 12th of the season as the Greyhounds cut the Steelheads’ lead 3-1.

The Greyhounds added two third period goals from Noah Carroll and Morgan Frost to even the score 3-3 and send the game into overtime. With the score still even 3-3 after overtime, a shootout would be needed to solve this one. Mathieu Foget shot first for the Steelheads and beat Villalta to put the Steelheads up. Jack Kopacka, Morgan Frost and Nicolas Hague all shot next, and were all stopped. Owen Tippett added a shootout goal to seal a 4-3 win for the Steelheads and snap the Greyhounds’ 23-game win streak.

The Steelheads are back in action tomorrow in Kitchener to take on the Rangers.