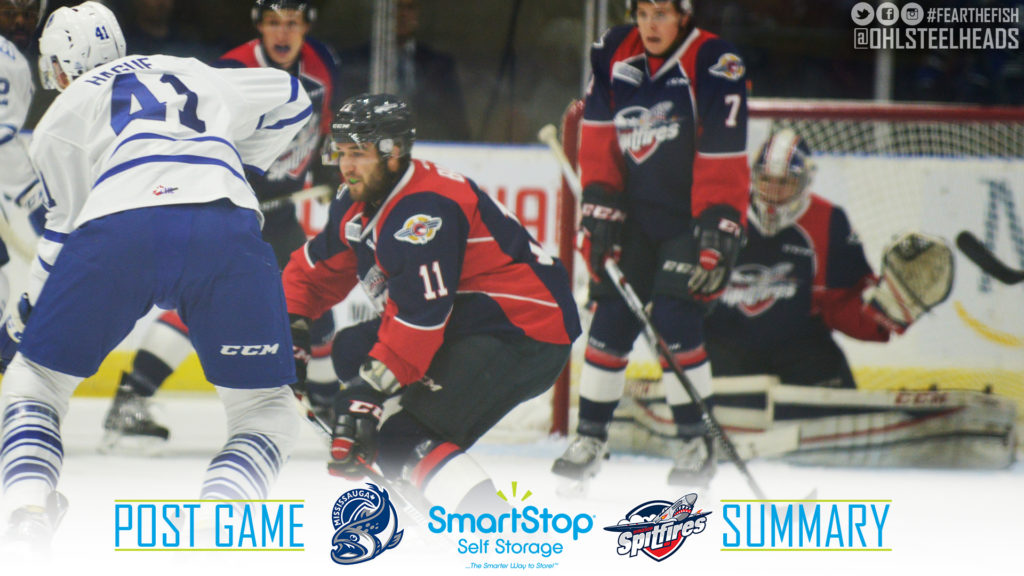 The Mississauga Steelheads returned to action Thursday night with a visit to Windsor to take on the defending Memorial Cup Champions. The Steelheads were without captain, Michael McLeod and the Spitfires were without their number one goalie, Michael DiPietro as both are away at Hockey Canada’s selection camp vying for a spot on Canada’s junior team for the upcoming 2018 IIHF World Junior Championship. The Spits were also down two of their leading scorers as Logan Brown looks to earn a spot on Team USA’s roster for the World Juniors and Aaron Luchuk was traded to the Barrie Colts earlier today. Tonight marked the first meeting for these two teams this season, with the Spitfires coming into tonight’s game having won three of their previous five games, and the Steelheads looking to snap a nine-game losing streak.

Emanuel Vella got the nod between the pipes for the Steelheads, while Spitfires’ goaltender, Lucas Patton made his first start in goal for Windsor. The opening frame was even paced and clean as neither team took any penalties. The Spitfires drew first blood as Connor Corcoran opened the scoring at 6:32 from Luke Bolka to give the home team a 1-0 lead. Past the halfway mark of the frame, the Steelheads were able to get on the board as Trent Fox batted the puck past Patton to even the score 1-1. Nicholas Canade and Stephen Gibson assisted on Fox’s ninth of the season. The Steelheads outshot the Spitfires 13-9 in the opening frame.

The Spitfires restored their one-goal lead in the second as Mathew McDougall put home his eighth of the season from Cole Purboo and William Sirman. Michael Little appeared to even the score 2-2, but after a lengthy review determined there was a high sick, the goal was waived off. The Steelheads outshot the Spitfires 12-7 in the second and trailed by one on the scoreboard heading into the final frame.

Ryan McLeod shifted the momentum early in the third, scoring just 21 seconds into the frame. Nic Hague and Michael Little assisted on McLeod’s eighth of the season. Past the halfway mark of the frame, the Spitfires restored their lead as newly acquired centreman, Curtis Douglas capitalized on a power play scoring his first goal as a Spitfire. Bolka and Corcoran assisted on the goal. Minutes later, the Steelheads evened things back up, as Michael Little scored a shorthanded goal, earning some redemption from the goal that was waived off earlier in the game. The game would head to overtime with the score even 3-3 at the end of regulation.

In true 3-on-3 fashion, the overtime frame was intense and fast paced as both teams exchanged a number of close chances. Emanuel Vella made some key saves to keep things tied and send this game into a shootout.

Windsor’s Jake Smith would take the stage first, but his shot was stopped by Vella. With a goal on the night, Ryan McLeod was the Steelheads first shooter, and he made no mistake beating Patton. Windsor’s second shooter, Mathew McDougall scored while Owen Tippett missed for the Steelheads. After two shooters, we were even with one goal apiece. Cole Purboo was the third shooter for Windsor, but was stopped by Vella, setting the stage for Nic Hague who beat Patton to win it 4-3 and snap the Steelheads’ nine-game losing streak.

The Steelheads will be back in action on Saturday as they travel to London before returning home to host the Sudbury Wolves for the annual Teddy Bear Toss game on Sunday.