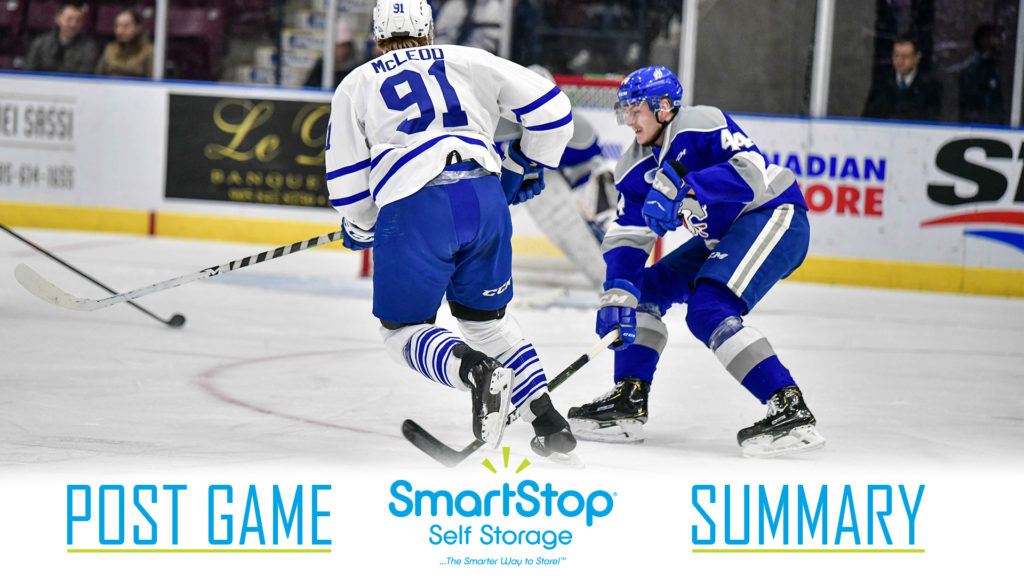 SUDBURY, ON – For the Mississauga Steelheads, it was an afternoon to forget at the Sudbury Community Arena as the club closed out the weekend with a 7-0 loss to the Sudbury Wolves on Sunday.

Owen Gilhula opened the scoring for the Wolves with his third of the season at 12:36 of the first period. Gilhula collected the pass from rookie linemate Quinton Byfield and fired a shot that beat Jake Ingham over the glove. Gilhula would return the favor shortly thereafter; setting up Byfield just a few shifts later to put the Wolves up 2-0 heading into the intermission. Shots on goal through 20:00 were 10-9 in favor of the home side.

It was more of the same in the middle stanza. Despite four powerplay opportunities and plenty of quality scoring chances, the Steelheads were unable to beat Finnish netminder Ukko-Pekka Luukkonen in the second period. Drake Pilon and David Levin would add tallies for the Wolves; giving them a 4-0 lead after 40 minutes.

The third period started with back-to-back one-timer goals from 2017 first round pick, Blake Murray; the second of which came with the man-advantage. Murray’s 10th and 11th of the season would all but seal the victory for the Sudbury Wolves as they’d go on to take this contest by a final score of 7-0. Owen Robinson rounded out the scoring for the Wolves.

The Steelheads are back in action on Friday night at the Paramount Fine Foods Centre when Serron Noel and the Oshawa Generals come to town for the first time this season. Then, on Sunday afternoon, the Steelheads play host to the Saginaw Spirit in the 7th Annual Teddy Bear Toss Game. As part of the festivities on Sunday afternoon, Canadian Tire will be set up on the concourse selling bears for fans to toss on the ice will all proceeds going back to Canadian Tire’s Jumpstart Foundation. Additionally, tickets for children 12 and under are just $6 while fans are encouraged to bring their skates and join the Steelheads for a post-game skate with the team after the final buzzer. Secure your seats online here or visit the Paramount Fine Foods Centre Box Office this week. MORE DETAILS