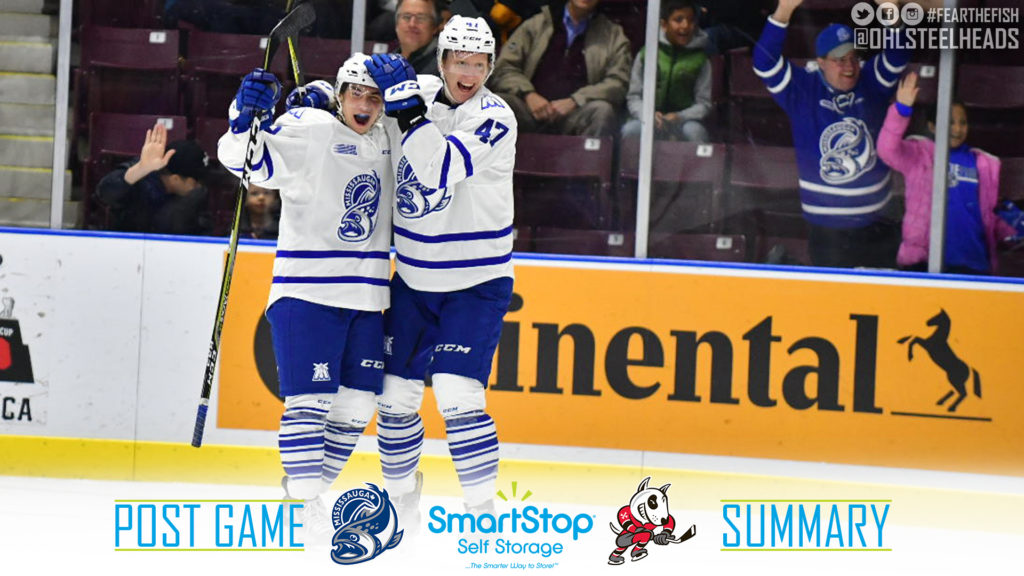 After picking up their first back-to-back wins of the season, the Mississauga Steelheads came out hard with momentum on their side this Sunday afternoon. Looking to beat their division rivals the Niagara IceDogs, the Steelheads started off strong putting the pressure on early. Nicholas Canade scored his first OHL goal at 5:17 with help from Trent Fox. This goal came shorthanded as the Steelheads were down a body due to a two-minute tripping penalty being served by Merrick Rippon. The IceDogs showed immense physicality as they looked to even the score but Jacob Ingham stood strong turning away all of Niagara’s shots. After the first period the shots we 13 for the Steelheads and nine for the visiting IceDogs.

The second period started off strong with the Steelheads firing on Dhillon just eight seconds into the frame. 38 seconds into the second period, Boomhower would head to the box for tripping. 1:30 later, Niagara’s Liam Ham would sit for interference leading to some four-on-four action. Once Boomhower’s penalty expired, the Steelheads capitalized on the 30-second power play as Jacob Casganette netted his fifth of the season, from Brendan Harrogate and Ryan McLeod. With momentum flowing in favor of the Steelheads, Zach Shankar got sent to the box for ripping Ryan McLeod’s stick out of his hands. A minute into the Steelheads’ power play, Nicolas Hague shot one through all the traffic in front of Stephen Dillon to extend the Steelheads’ lead to three. Ingham continued to stay strong between the pipes, stopping eight of the IceDogs attempts in the second period. With five seconds remaining in the frame, Steelheads’ Nicholas Canade and IceDogs’ Elijah Roberts participated in some extra-curricular activity, but the refs put an early stop to that. Both boys got sent off with 10-minute misconducts.

Ingham, continuing his stellar performance right into the third, made a bunch of huge saves right off the bat. After some back and forth, the IceDogs get one past a flustered Jacob Ingham to cut the lead to 3-1. Daniel Singer registered the goal and the assist went to Ben Jones. The Steelheads answered right back with Shaw Boomhower tipping in a rocket from Nicolas Hague. The other assist went to Jacob Moverare as the Steelheads’ three-goal lead was restored. With less than five minutes remaining in the third period, Trent Fox and Elijah Roberts got under each other’s skin and found themselves being escorted off the ice by the referees. Fox was handed a game misconduct and Cameron Gaylor sat for him to serve the five-minute fighting major, while Roberts ended up with a coincidental five-minute fighting major. The Steelheads held on to their three-goal cushion for the remainder of the frame, taking all six points that were up for grabs this weekend. The final shots on goal were 42-32 in favour of the Steelheads.