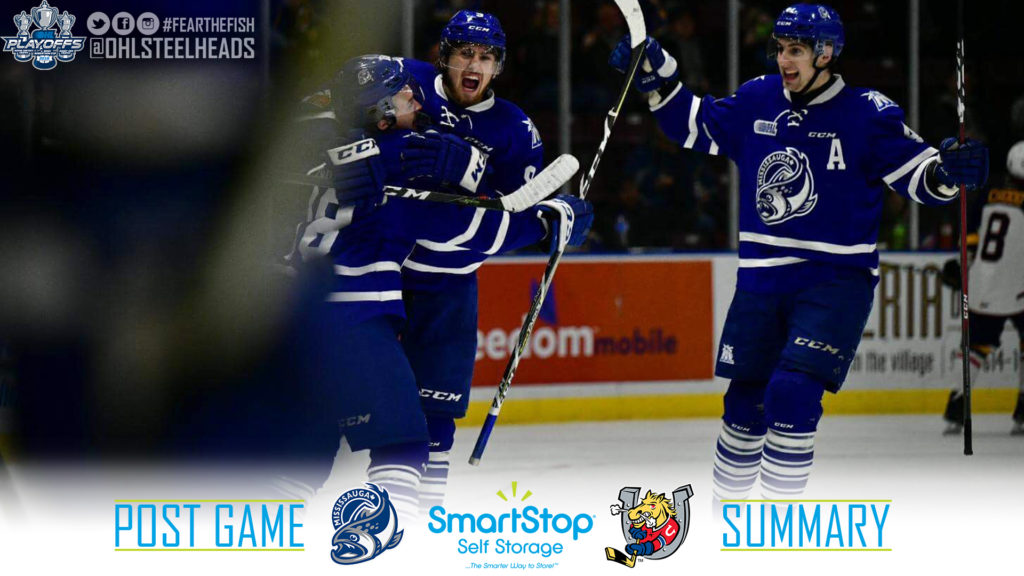 The Barrie Colts were in town to take on the Steelheads in game three of the Eastern Conference quarter final. The series was tied at one game apiece after Barrie’s 5-3 victory on Monday night.

The energy from last night’s game carried over into the first period with both teams firing shots at a speedy pace. Mississauga got an early power play opportunity when Ryan Suzuki was called for holding. The Fish were unable to capitalize on the man-advantage, keeping it a no-goal game. There was some back and forth action with both teams having some scoring chances, but no pucks found the back of the net in the first frame. Shots heading into the first intermission were nine to six in favour of Mississauga.

The Colts were on the receiving end of an early power play this to start off the second when Michael Little was called for hooking at 1:45. The Steelheads may have been down a man, but the spent a large majority of the two-minute minor in Barrie’s zone with multiple scoring chances. They killed off the penalty and kept the score dead locked at zero. Mississauga got a power play of their own shortly after when Jaden Peca was caught high sticking. The Steelheads failed to convert on the man-advantage. Shortly after, Dmitry Sokolov got his second of the playoffs when a fluky goal fluttered past Jacob Ingham to give Barrie the 1-0 lead. Mississauga responded with a goal of their own when captain Michael McLeod fired one past Leo Lazarev on his backhand. The Fish ended the second period on the power play when Joey Keane was charged with a check from behind. Shots at the end of the frame were 28-17 in favour of Mississauga.

The third period started with the Steelheads on the man-advantage for 1:45 due to the Keane penalty. The Fish could not find the back of the net on the power play, but Owen Tippett scored his third of the playoffs at 3:06 of the frame to give Mississauga the 2-1 lead. Barrie tried to play catch up, but couldn’t get the equalizer. The Steelheads won with a final score of 2-1, also giving them a 2-1 lead in the series.

Game four is Thursday at the Hershey Centre. Puck drops at 7PM.