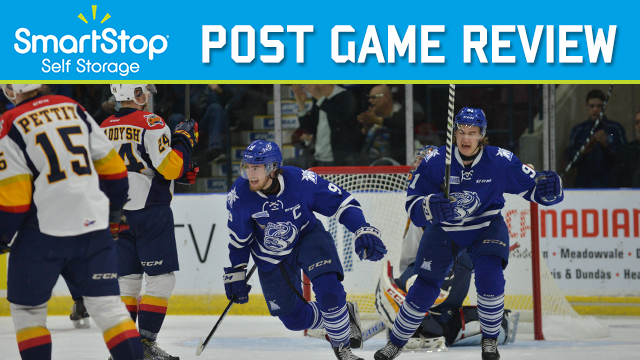 After a close Game 2 the previous night, the Steelheads looked to answer back at home at the Hershey Centre. With many NHL scouts and personnel in the building, the Steelheads didn’t disappoint.

In the first period, Ryan McLeod scored for the second straight night going in alone against Erie goalie Troy Timpano, roofing it top corner on the backhand, giving the Steelheads a 1-0 lead. After a strong penalty-kill to end the period, the Steelheads went into the first intermission with a 1-0 lead.

Trent Fox would add another goal for the Steelheads, increasing their lead to 2-0. Goalie Matthew Mancina stood tall as Erie picked up their game, making big saves down the stretch before Alex DeBrincat cut the lead in half with a goal of his own. Physical play also picked up including offsetting minors from Steelheads’ Shaw Boomhower and Otters’ Mitchell Byrne. Erie would add two more goals before the second intermission from Dylan Strome and Anthony Cirelli to take a 3-2 lead going into the final frame.

In the third, the hard-hitting hockey continued as the Steelheads looked for the equalizer. Midway through the period, the equalizer came off the stick of Nathan Bastian as he banked the puck off Timpano from behind the net. Steelheads weren’t done there, feeding off the Hershey Centre crowd. Captain Michael McLeod found the back of the net, deflecting a shot by Vili Saarijarvi to give the Steelheads a 4-3 lead.

The Steelheads would hold on, taking a huge victory in front of their home crowd. They now only trail in the series 2-1 with the next game scheduled for Wednesday, May 10 at 7pm at the Hershey Centre.